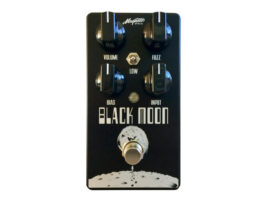 These two drive pedals serve up a plethora of gain options.
It seems that Magnetic Effects is on a dirt box run. Having released the Sandare V2 overdrive/boost pedal earlier this month, the UK pedal builders have introduced two limited edition offerings. The Black Moon is a clone of the legendary germanium Fuzz Face, while the Lonely Robot is a Rat-inspired distortion unit.
Black Moon
The Black Moon is the brand’s take on Dunlop’s iconic germanium Fuzz Face, with a few tricks up its sleeve.
Peeking under the hood, the pedal features a pair of special germanium NOS transistors. These deliver a rich, vintage fuzz tone that can be dynamically shaped via your guitar’s volume control.
In terms of controls, the Black Moon sports four knobs: “Volume”, “Fuzz”, “Input” and “Bias”. The latter two should be familiar to fans of the original Fuzz Face. The “Input” control allows you to modify the signal level and impedance of input, affording greater control over the feel of the fuzz.
The “Bias” control, on the other hand, alters the transistors’ tuning. This component – designed with the Germanium transistors in mind – is aimed at offsetting changes in temperature that negatively impact transistor bias.
Additionally, there’s a three-position “Low” switch that toggles between different bass presets, including an option to tighten up the low end.Lonely Robot
Magnetic Effects’ Lonely Robot that pays homage to the classic Pro Co Rat. This versatile dirt box delivers a host of hairy tones as well as additional tone-shaping faculties.
Diving right into the controls, the Lonely Robot features six knobs: “Bass”, “EQ”, “Gain”, “Volume”, “Treble” and “Clip”. The “Bass” knob manages a post-gain active bass EQ that enables boosting or cutting low-end tones.
The “EQ”, on the other hand, controls gain at specific frequencies. Turning it clockwise dials in a higher gain tone that’s also brighter and tighter. Turning it the other way results in a fuller, lower gain sound.
The “Clip” knob governs compression and harmonic saturation. The more gain dialled in, the more range this control has. Apart from these tone-shaping features, the pedal also has an internal voltage doubler that offers increased headroom.
Retails at £125 each. More information at magneticeffects.net.The post Magnetic Effects introduces the Black Moon, Lonely Robot appeared first on The Guitar Magazine.