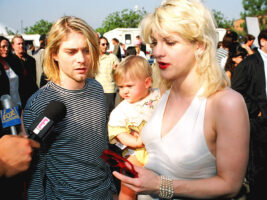 Courtney Love says Kurt Cobain would “not be allowed” to sing Polly today: “He chose to sing it from the criminal’s perspective.”

Courtney Love, speaking in an interview for the 30th anniversary of Nirvana’s 1991 album Nevermind, thinks the song Polly would not be allowed to be written in this day and age because of the way its subject matter was portrayed.