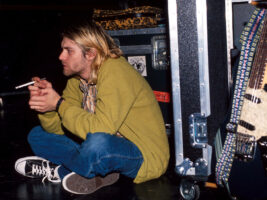 Kurt Cobain is one of the most iconic and revered figures in rock ‘n’ roll, and his approach to guitar playing has inspired millions of guitarists from all over the world for over three decades. As is often the way with music icons, there’s plenty of myths and legends told about Kurt’s short life and tragic death, and plenty more surrounding the way that he made the sounds that shook the world like no guitarist has since. Thankfully, with the help of some of the people who were there, we can hopefully clear some of those oft-repeated myths up.

The guitar used in the Smells Like Teen Spirit Video is at the Hard Rock Café in Australia
Let’s start with an easy one: the guitar Kurt used in the Smells Like Teen Spirit video is NOT currently (nor was it ever) in an Australian location of popular restaurant chain Hard Rock Café. Kurt used a 1969 Lake Placid Blue Competition Mustang for the Smells Like Teen Spirit video. Fender’s Competition Series was distinguished by the racing stripes on the body. They were made from 1968 until 1973.
The guitar from the video remained in storage during the In Utero Tour as Kurt had recently received four stock Mustangs that his tech, Earnie Bailey would modify for that tour – three Sonic Blue and one Fiesta Red. In 2009, the Australian Hard Rock Cafe claimed to have Kurt’s Competition Mustang from the iconic video, but the actual guitar has been confirmed and has been on display at the Museum Of Pop Culture in Seattle for over a decade. It sports a neck joint repair and damage along the lower edge sustained at the infamous Dallas Trees Club performance in 1991 when Kurt, having a bad night, smashed it into the mixing board repeatedly.
The four Mustangs on the In Utero Tour were modified thusly, according to KurtsEquipment.com.
Image: Raffaella Cavalieri / Getty
“First, the nut had to be cut for heavier strings, then the neck shimmed for a better bridge angle with the cardboard backings from hotel stationery pads, and a Gotoh tune-o-matic bridge was installed. Earnie also had to modify the tailpiece to block the vibrato, which Kurt hated. He would remove the two springs for the vibrato bar, add washers to the posts beneath the bridge plate, which locked it down to the plate. Lastly, Earnie would flip the tailpiece around allowing the strings to feed directly through the tailpiece, not under, and the ball ends of the strings would fit in the tailpiece’s recesses.”
Later on, all of his Mustangs were routed for full-size Seymour Duncan JB humbuckers in the bridge position [with the exception of his 1969 Competition Mustang].
Kurt had a white mustang
Kurt did say that his favourite guitars were Mustangs and of course he owned several. But Kurt never used a white Mustang – the Sonic Blue Mustangs could look white in certain lighting, especially the lighting used during the In Utero Tour.
Kurt owned a Jazzmaster
Kurt never owned a Jazzmaster, although again, the Hard Rock Café claims to be in possession of one, which is signed by Kurt. In all likelihood, this was a guitar someone got autographed by Kurt at some point and sold it to Hard Rock claiming it was Kurt’s. Earnie Bailey has said that he did once find a lefty Jazzmaster and was going to buy it for Kurt as a surprise, but he and Krist Novoselic decided it was too expensive.
Image: Jeff Kravitz / FilmMagic
Kurt hated Les Pauls
Kurt didn’t necessarily hate Les Pauls, he just hated what they represented at the time: classic rock. That being said, Kurt did own and play a couple through the years – he had a black Epiphone Les Paul that was used for a Nevermind photo shoot. He also had a Hagstrom 3/4 size Les Paul copy, which he got in 1992.
He had a Gibson SG Standard that he smashed as well. He had a left-handed Ibanez Les Paul Custom copy that he actually really liked – it had DiMarzio X2N pickups with coil taps and speed knobs. Earnie says he may have sent this out with the band when they were recording In Utero. We are unsure if it was used or not, but according to Earnie, “Krist once said Kurt refused to play it live because it made him look like Jimmy Page.”
Kurt never played Marshall amps
Many will cite the band’s performance on Top Of The Pops in 1991 where they were seen with Marshall heads and cabinets as evidence that in fact they did play through Marshalls, Top of The Pops performances at that time were usually (and notoriously) not live. The band was supposed to mime their way through a backing track of Smell Like Teen Spirit – the only thing to be performed live were the vocals. As with various other bands who took issue with this over the years, Kurt did his best to ruin the performance the finest middle fingers to ever grace the Top of the Pops airwaves.

People who say that Kurt did not care for Marshalls are spot on, however. According to Earnie Bailey, “Regarding the Marshalls, Kurt really disliked Marshall amps. Partly, due to the whole hair metal stigma happening in the 80s, and he didn’t like the sound of them. I think it was too generic for him. If you recall, on his 4×12 cabs, he had his Marshall logos taped over, not removed (which is a simple task), as a statement towards the status associated with owning Marshall gear.
“Marshall 4×12’s are easy to find whether you are buying or renting overseas. This is a likely reason why he used them considering how often they had to be replaced. Kurt using a Marshall head for a power amp is pretty out there. Think about it, a Marshall’s output stage is rather dirty and would be even more so at the volumes Nirvana played at.”
In spite of all of this, there was actually one time that Kurt did use a Marshall. It was during one of the last recording sessions he ever did at Bob Lang’s (Adam Casper was the producer) studio in Seattle. More specifically, he used a Univox guitar and a 50-watt Marshall 2×12 combo to record the final song the band ever completed, You Know You’re Right. As the story goes, he showed up to the studio without any gear and had to use one that was at the studio. Earnie did some preamp tube swapping with another amp, to lower the gain structure and dial in the sound of the 50-watt combo for Kurt.
Live, Kurt typically used a Mesa/Boogie preamp along with a few Crown 800W power amps which would often blow up during the Nevermind days. Those were switched out for two Crest 4801 power amps, which were much more durable. However, Cobain did have a short-lived Marshall Series 9000 power amp during 1991. Kurt also was known to use a Carver power amp, which was built by the great Bob Carver. In the studio, he would often use a 135-watt Fender Twin Reverb Blackface [we believe it was a 1982]. Which had a set of four 6L6 in the power stage and 7025 tubes in the preamp stage.
Photo: Frank Micelotta / Getty Images
Kurt and the DOD Grunge Pedal
Created by DOD as a rather shameless cash-in on the grunge movement’s explosion of global popularity, the Grunge pedal was many young guitar player’s first pedal if they came to the instrument in the early 90s. In the years since, however, people often remark that not only did Kurt approve of this pedal, he actually used it live.
Well, sort of. On 29 December 1993 Nirvana played a gig in San Diego, and there on the floor that night was indeed DOD’s infamous Grunge pedal. However, during the gig he was seen to play the pedal for a moment, then unplugged it from the chain and threw it into the crowd remarking, “Excuse me, that was my grunge pedal.”

As you can see from the video, even if we want to claim that Kurt did use the Grunge pedal, it was clearly as a joke, and his tossing it into the crowd probably reveals what he thought of this cash-in on the movement his band had created. The pedal that Kurt threw from the stage sold for $16,000 in 2021.
What is Kurt’s distortion sound?
Although some have claimed that Kurt’s main distortion sound was a ProCo RAT, that’s not entirely true. It’s true that a RAT was used on some songs on Nevermind, but the main distortion sound on that record was a humble Boss DS-1. Later on In Utero and Unplugged, it was the DS-2. The In Utero tablature book also claims that a Rotovibe was used – it wasn’t.
Kurt didn’t know anything about music theory
Although it’s not a gear myth, necessarily, we want to address the myth that Kurt Cobain rebelled against or “shunned” music theory. Again, we turned to Earnie Bailey for answers.
“With Nirvana, Krist and Kurt had strong opinions about what record albums were allowed in their homes, with diverse collections, and critical choices within every genre,” he explains. “As a group, they were analytical about popular music, to where it became second nature. So while they not have had technical music theory training, they certainly had a strong working knowledge of it.
Photo: Frank Micelotta / Getty
“David knew time signatures, had the stronger musical vocabulary, and also the wisdom not to use it competitively. And like many self-taught artists, they cultivated the persona of being primitive musicians but truthfully, they studied songwriting, the Beatles in particular.
“If Kurt publicly shunned music theory, here is what I can offer. As teenagers in the 70s and 80s, I recall musicians being divided into groups learning via the classroom, and those of us attracted to music that appeals to loss of control. We naïvely viewed music theory as a set of rules rather than a musical language, and bashing it was a mode of defense because we lacked the confidence or technical knowledge of the terminology.
“So the argument over theory became a fork in the road caused by methods, rather than a question of wrong or right. For example, Ace of Spades by Motörhead, and Rikki Don’t Lose That Number by Steely Dan are both fantastic tracks, but worlds apart regarding composition.”
So were any artists in Kurt’s record collection that might surprise people?
“They/he loved ABBA! That’s the best one I can think of.”
For more features, click here.
The post Eight myths about Kurt Cobain’s gear that people still believe appeared first on Guitar.com | All Things Guitar.