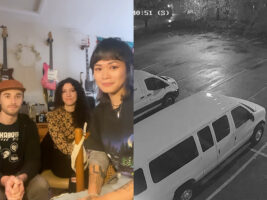 Days before heading out on tour, math rockers Covet have shared that their van was stolen.

Band leader Yvette Young posted to Instagram yesterday (8 November), informing fans of their situation. “I can’t believe i’m writing this 4 days before tour in this predicament,” she wrote.
“My bandmates and I were in Oakland on Saturday (5 November) in a recording session and at 6:45pm, our van was stolen directly from the studio parking lot. Somebody had broken in and hotwired it.”
The 2007 Ford E350 belonged to Young, who bought it with her own money as an investment for the tour. “I wanted me and my crew to be 100 percent safe,” she explained.
Fortunately, the band’s equipment was not in the van at the time of the theft, save for a drum rug. However, it’s still a “huge financial hit” on the band, who considered themselves $15,000 in the hole with the tour.

The group launched a GoFundMe campaign seeking exactly that amount. Within a day, it was successfully funded and then some: at the time of writing, patrons have donated $23,966.
“We are honestly so touched by everyone’s generosity and support,” Young wrote in an update post. “We have secured a rental! Thank you to everyone who shared, donated; and reached out.”
“Insurance ended up not pulling through and no word yet on the van recovery so all the donations are really going to help us keep the tour going. Amidst all this stress and pain, we feel very cared for and so lucky to have such overwhelming support. You guys rule ”

Covet’s Rebirth tour of the US kicks off on Friday (11 November) at Harlow’s in Sacramento, California. The band’s trek will also take them through the states of Nevada, Colorado, Nebraska, Wiscosin, Illinois, Michigan, Ohio, Vermont, New Jersey, New York, Maryland, Virginia, North Carolina, South Carolina, Florida, Alabama, Louisiana, Texas, and Arizona.
Learn more about the tour and get tickets on the Covet website.
The post Covet’s tour van stolen in Oakland mere days ahead of tour appeared first on Guitar.com | All Things Guitar.