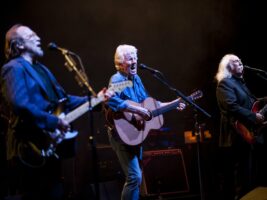 Five months after David Crosby, Graham Nash and Stephen Stills joined Neil Young in removing their music from Spotify in protest of vaccine misinformation, Crosby, Stills & Nash music has returned to the platform.

According to Billboard, CSN will be donating the proceeds from streams of their catalogue to COVID-19 charities for at least a month following the reinstatement.
In a joint statement in February following Neil Young leaving the platform in protest of podcast host Joe Rogan’s alleged practice of spreading COVID-19 and vaccine misinformation on his Spotify exclusive podcast, ​​David Crosby, Graham Nash, and Stephen Stills voiced their support for Young. “We support Neil and we agree with him that there is dangerous disinformation being aired on Spotify’s Joe Rogan podcast,” they wrote.
“While we always value alternate points of view, knowingly spreading disinformation during this global pandemic has deadly consequences. Until real action is taken to show that a concern for humanity must be balanced with commerce, we don’t want our music – or the music we made together – to be on the same platform.”
Several other artists, including Joni Mitchell, India.Arie, Failure and Nils Lofgren also joined Young’s boycott of the platform.
In response to the controversy, Spotify has published its content guidelines, and pledged to post a note on content that discusses COVID-19. However, this feature has yet to be introduced.
Young wrote on his website in January: “Spotify is spreading fake information about vaccines – potentially causing death to those who believe the disinformation being spread by them.”
He stated that the platform can “have [Joe] Rogan or Young. Not both”, referring to the Spotify-exclusive The Joe Rogan Experience podcast, which has, in recent times, gained notoriety for making baseless claims surrounding COVID-19 vaccinations and treatment. It has also hosted Dr Robert Malone, who discussed the controversial Mass Formation Psychosis theory.
The post Crosby, Stills & Nash return to Spotify after vaccine misinformation protest appeared first on Guitar.com | All Things Guitar.