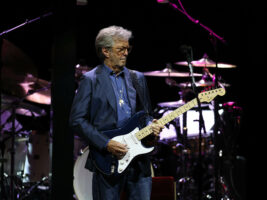 Blues guitarist Eric Clapton has been fined for speeding by a Brighton court, after he was caught by police driving over the speed limit last year.

Sussex police clocked the musician driving his Porsche at over 60 miles an hour on the A24 Shipley, in West Grinstead, north of Henfield, in October of 2021. Clapton pleaded guilty to the offence, and alongside having to pay the fine he will also receive three points on his licence.
The blues legend was also faced with a separate charge of failing to provide identification when he was stopped by the police in February of 2022, however this charge was later withdrawn.
Clapton’s £146 fine comes alongside a victim surcharge of £34 and costs of £90.
Alongside guitar playing, Clapton is an avid car-collector. His collection includes a number of Porsches, as well as Lamborghinis, Ferraris and Fords.
In May, Clapton was forced to postpone a number of concerts after he tested positive for COVID-19. The guitarist resumed touring later that month.
Clapton has been touring consistently since live music returned to stages. His return followed a period of criticism, as he had made a number of divisive comments throughout the pandemic, including spreading misinformation about the COVID-19 vaccine, speaking to anti-vaccine advocate and conspiracy theorist Robert F Kennedy Jr, and citing the controversial Mass Formation Hypnosis theory to explain why people are happy to be jabbed.
Earlier this year, he set out to clarify that he was “neither anti nor pro” the vaccine, however, did not explain why he stopped doing interviews with any outlet that wasn’t vehemently anti-vaccine.
The post Slow down, Slowhand: Eric Clapton fined £146 for speeding appeared first on Guitar.com | All Things Guitar.