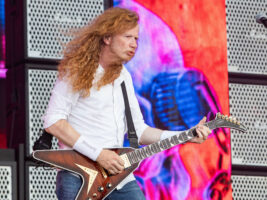 Things got a little bit heated at Megadeth’s appearance at Barcelona Rock Fest over the weekend, and not because of any pyrotechnics: frontman Dave Mustaine paused the band’s set to turn the air blue, after a guitar tech for Judas Priest was soundchecking on the adjacent stage during the band’s set.

Barcelona Rock Fest has a dual-mainstage setup, allowing acts to play right after each other, with one stage being set up while a band plays on the other. Fans also don’t have to travel far if they’re planning on seeing lots of acts. It’s a good setup, with one drawback: sometimes, a soundcheck on one stage might bleed into the other.
In fan-shot footage of the set, you can hear that that’s exactly what’s happening – Megadeth have stopped playing, and there’s some distorted guitar coming from the adjacent stage. Mustaine can be seen looking to his left, before he says: “The last night of the tour – we went all the way to the last fucking night, and then some pussy over on the stage next to us has to start playing while we’re playing. How fucking pathetic, amateur piece of shit you are.”
There’s then a pause, before Mustaine walks around the stage for a bit, and shows his middle finger to the offending tech. “Can we proceed now?,” he says having returned to the mic, and then mutters: “Fucking cunt.”
After another brief walk around the stage, Mustaine once again returns to say: “This is called Symphony Of Destruction.” The whole band gets one note into the song before stopping, and Mustaine once again walks over to the side of the stage. Finally, he returns to his mic, throws a pick into the crowd, mutters “motherfuckers,” and the song begins.
See the rather awkward one-sided exchange below.