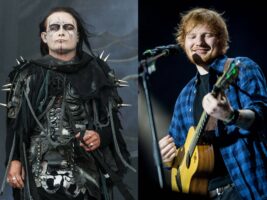 Dani Filth offers update on Cradle of Filth and Ed Sheeran collab: “He is gonna finish it, he assures me”

Dani Filth has assured fans that the Cradle of Filth and Ed Sheeran collaboration they’ve all been waiting for is underway, for real this time.

Speaking to Knotfest, the extreme metal star confirmed that he has followed through with his plans on working with Sheeran and that there really is now a song in the works.
“We still have yet to finish our song with Ed Sheeran,” said Filth. “He’s done some of it, but then he had a baby, and then he got obviously sidetracked with that and doing whatever Ed does, which is play massive shows around the globe. He’s not at our beck and call.”
“But he is gonna finish it, he assures me. Actually, I spoke to him quite recently.”
Filth added that there’s no release date as of yet and the song “[will be released] when it’s finished. We don’t know when it’s coming out.”
A year ago, the Cradle Of Filth leader revealed that he’s been emailing popstar Ed Sheeran about a possible musical collaboration. While there’s been little word on the project since then, it seems that fans can now start looking forward to what’s sure to be one of the most unlikely musical team-ups in history.
Asked about how he thinks fans might react to the band’s decision to dabble in something so different this time, Filth replied “I think they just have to like it or lump it really.”
“I wouldn’t say there’s an irony in it. We really appreciate the marriage of extremes,” said the singer. “So I’d rather do a track with someone like Ed Sheeran than I would do a track with …. think of someone else. I’m not going to name names. But I’m just saying the clash of interests, the marriage of extremes, I think that’s interesting in itself.”
Watch the full interview below.

The post Dani Filth offers update on Cradle of Filth and Ed Sheeran collab: “He is gonna finish it, he assures me” appeared first on Guitar.com | All Things Guitar.