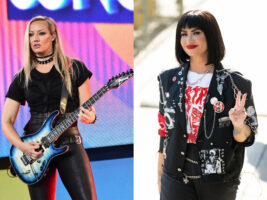 Nita Strauss on the resurgence of rock: “Bringing real musicianship back to the forefront of mainstream music – who wouldn’t want that to happen?”

Nita Strauss has opened up on the joy of being part of the rock revival in mainstream music and spoke of how pop-turned-rock artist, Demi Lovato, who she now tours alongside has a real passion for alternative music.

Strauss left Alice Cooper’s band back in July to join Lovato as their new live guitarist, with their first full-set debut together featuring some amped-up versions of Lovato’s previous pop hits, some new heavier tracks, and a classic cover of Iris by the Goo Goo Dolls.
In a new interview with Revolver, Strauss shared her excitement on the plethora of pop artists turning to rock. She said, “How exciting to be a part of that? How cool? I’ve been in the rock world a long time. I’ve paid my dues, I’ve got my street cred’, you guys know hopefully by now that I’m not in it for the money, I’m in it because I love it.”
She continued, “How cool for me… and Demi, all of us, to get to be on the ground floor of what could be this huge surge of rock music coming to the forefront. Bringing live guitars, real drums, real musicianship back to the forefront of mainstream music – who wouldn’t want that to happen?”
Strauss then spoke further on how Lovato’s love for rock isn’t fabricated by a label, it’s real and has been there for sometime: “This is not a situation where a label is saying, ‘hey, you know what I think would sell some records? If you completely change the sound that made you as huge as you are and start playing rock’,” She explained. “If you ever listen to Demi do interviews and [they] ask about some of her favourite bands, she’s talking about Job For A Cowboy and Maylene And The Sons Of Disaster, this is not the talk of somebody who’s been told to say what their favourite bands are.”
Along with Lovato, pop artists such as Machine Gun Kelly and Willow also made switches to rock. Fresh on the music scene as a former Disney Channel actor, some of Lovato’s first solo releases were pop-rock.
You can get tickets to see Strauss play along with Lovato on their upcoming tour here.
The post Nita Strauss on the resurgence of rock: “Bringing real musicianship back to the forefront of mainstream music – who wouldn’t want that to happen?” appeared first on Guitar.com | All Things Guitar.