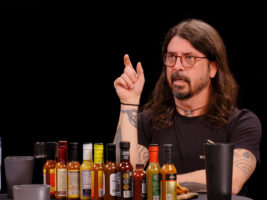 In a new interview, Dave Grohl has recalled other stage injuries that matched the incident in 2015, when he fell off a stage and severely broke his leg. Among them, an electrocution that happened after he jumped in a pool, and got back on stage to play.

READ MORE: Dave Grohl recalls Nirvana’s ambitions with Nevermind: “Hopefully we’ll achieve the success of Sonic Youth and get our own apartment!”

Grohl recalled the incident on the excellent Hot Ones interview series, which tasks its guests with answering questions while also consuming a series of spicier and spicier chicken wings.
The host, Sean Evans, asked him about the second-worst injury he received while performing, after pointing out the 2015 incident which saw him break a leg after falling off a stage.
Grohl pointed out the time he was hit in the face with a half-dollar in 1996, which saw him wait five hours in the emergency department before being told to “just put a bandaid on it.”
But his second example was a little more dramatic: “We played some fucking corporate gig for Doc Martens in Las Vegas. It was at some hotel – there was a pool, and the stage was right by it. And, I thought it would be funny if I invited the whole audience with me during this jam.
“So I jump in the pool, the whole audience follows me, we’re all partying. And then I get out of the pool, get back on stage – someone hands me the guitar and I step on the distortion pedal and it’s like…” Grohl then performed an impression of someone being violently electrocuted.
“It sucked,” he concluded.
The reason Grohl (presumably soaking-wet) was only electrocuted when stepping on his distortion pedal – and also is still around to tell the tale – comes down to how grounding works. If there was a potential difference between the ground of the outside of the pedal, and the ground connected to Grohl’s bridge and strings, this could have caused a current to flow through Grohl to reach a lower ground state when his foot hit the pedal. This current is unlikely to be anywhere near as strong as full mains AC voltage, however, can still be pretty serious.
You might have experienced this if you’ve ever touched something like the base of a lamp while holding your guitar. If there’s a potential difference between the lamp’s ground and your amplifier’s ground, it can lead to quite a painful shock.
See Grohl’s full interview below.

The post Dave Grohl recalls being electrocuted by a guitar pedal after jumping in a pool appeared first on Guitar.com | All Things Guitar.