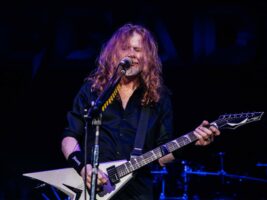 Megadeth frontman Dave Mustaine has shared a second taste of the band’s upcoming album, The Sick, The Dying And The Dead in a short video addressed to a lucky fan.

READ MORE: The best guitar albums of the year 2021

The brief listen of the track Life In Hell marks the second time Mustaine has teased  material from the group’s 16th studio album – and once again, he delivered it through Cameo, a video service which lets fans pay celebrities for custom messages.
The snippet was uploaded to YouTube by the Megadeth For Destruction channel for fans to check out.
“How would you like to hear a little bit of the new album?” Mustaine said in the message. “This is song two from side one, it’s called Life In Hell”

Earlier in July, Mustaine shared a teaser of the album’s title track in another Cameo video. Proceeds from the sale went towards the American Society For The Prevention Of Cruelty To Animals.
The Sick, The Dying And The Dead – the band’s first new album since 2016’ Dystopia – is set to release in the Spring of 2022 and will feature a mysterious new bassist on duty.
James LoMenzo was announced to be the group’s new touring bassist following the firing of longtime bassist David Ellefson, who was dismissed when several sexually explicit videos of the musician leaked online.
The post Dave Mustaine shares a taste of Life In Hell, a new song from Megadeth’s highly anticipated new album appeared first on Guitar.com | All Things Guitar.