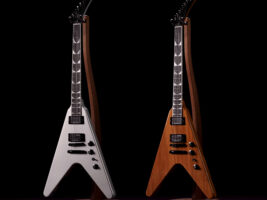 Dave Mustaine’s first signature guitar with Gibson has been released to the wider world, following a limited release direct from Gibson last December.

READ MORE: 2022, the year of the Flying V: a rundown of the teased and confirmed upcoming Gibson signature Vs

In December 2021, the Dave Mustaine Flying V EXP arrived in “extremely limited” quantities and was only available directly from Gibson. The wider release is still a limited-edition guitar, however, the instrument is now available to order from dealers worldwide.
The guitar is available in two finishes: either Antique Natural or Silver Metallic. Construction consists of a mahogany body and neck, with a compound-radius ebony fretboard and 24 frets. The guitar’s scale length also measures 25.5 inches, making it one of the most modern-spec’d guitars Gibson makes.
There’s a two-piece hard-tail Tune-O-Matic bridge, as well as two black Seymour Duncan open-coil humbuckers, Dave Mustaine’s own signature Thrash Factors. These are controlled by individual volume controls, a master tone control and a three-way switch. These controls aren’t mounted to a pickguard like in most Gibson Flying Vs, as there isn’t one. There’s an angled Stratocaster-style jack socket on the inside of the upper V horn, right next to a large straplock for easy wrapping of your cable.
The wiring is also unique to Mustaine’s preferences. The volume knob closer to the bridge, despite its higher position, controls the bridge pickup. This has been done to make volume swells with your pinky easier, if you want to keep the bridge pickup selected while you swell.
The guitar’s headstock is a six-in-line, Explorer-style one, evoking Mustaine’s signature Jackson and Dean signature guitars with a Gibson twist.
Check out Gibson’s launch video below.