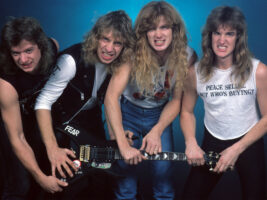 Ex-Megadeth bassist David Ellefson has recalled one of the inspirations behind the frantic tempo found across Killing Is My Business… and Business Is Good!, the debut album by Megadeth. The secret? Cocaine.

READ MORE: David Ellefson on his legacy with Megadeth: “My DNA is all over that”

Famously, half of the budget for Killing Is My Business… and Business Is Good! was burnt on drugs, alcohol and food, leading to the band having to fire the producer and finish it themselves.
Speaking on the SDRS show, Ellefson recalled the experience of playing with original Megadeth drummer Gar Samuelson. “It was so fun in the studio playing with him,” Ellefson said, “because I tell you, every time I hear, like, [Killing Is My Business… and Business Is Good!] I can just hear, like, ‘Okay, snort a big rail– ‘sniff…’ Okay, ready, Rattlehead, GO!”’
“And then by the time it gets to the break, I remember needing a break – we’re just looking at each other, me, Dave, and [Gar] in the room, like: ‘Holy shit! That tempo was way faster than we wanted it to be!’
“And then we get to the break, tempo: ‘slow down, take a break’, before we kick it back into the outro.” Ellefson concluded: “So, I can hear what colour the powder was that we snorted at various tempo shifts within that record”
Ellefson, a married Lutheran pastor, was fired from Megadeth last year after videos of him masturbating on a video call with a 19-year-old fan surfaced on the internet. Following the scandal, Megadeth frontman Dave Mustaine called in a session bassist to replace Ellefson’s bass parts on Megadeth’s upcoming record, and hired James LoMenzo to replace him on the road.
More recently, Ellefson recalled his shock at how he was treated across the scandal. He said on The Metal Interview podcast: “I’ve obviously never had anything quite like that happen to me before. And the fact that it was happening like that was just… I couldn’t believe the level of just shittiness of humankind; I just couldn’t even believe it, man.”
“Now I… Not to use a religious reference, but I guess I know how Jesus felt: ‘Carry your cross and then kill him. Shit, we got the wrong guy,’” he added.
The post David Ellefson recalls the inspiration for frantic tempos on debut Megadeth LP: cocaine appeared first on Guitar.com | All Things Guitar.