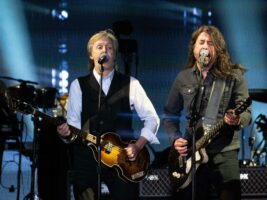 READ MORE: Musicians in the world of guitar have their say on abortion rights

McCartney, the festival’s oldest-ever solo headliner at 80, surprised fans when he invited Grohl out onto the Pyramid Stage during his two-and-a-half-hour set. Calling Grohl a “hero from the west coast of America”, the former Beatle revealed that Grohl “flew in specially to do this”.
“I swear, I would never miss being right here with you, right now,” Grohl replied, according to the BBC.
Together, the two jammed to a rock version of The Beatles’ I Saw Her Standing There before taking on the Wings’ classic Band On The Run. This also marks Grohl’s first concert since the death of his longtime friend and Foo Fighters bandmate Hawkins this March.

After their set, McCartney delivered the second surprise of the night, bringing out Bruce Springsteen, who played his 1985 single Glory Days and the Fab Four’s I Wanna Be Your Man.
Both guests then re-joined the band for a banging finale on Abbey Road’s The End, wowing the crowd with an extended guitar jam.
Following two years of pandemic delay, Glastonbury wrapped up Sunday (26 June) with a headline set by rapper Kendrick Lamar. Some 200,000 people attended the four-day festival in southwest England, and the crowd for McCartney himself was estimated at 100,000, making history as one of the largest headline shows in Glastonbury.
The show has received raving reviews from critics and fans alike, with the The Guardian called it “a euphoric trip through time” and The Sunday Telegraph describing it as “one of the most thrilling, uplifting, banger-filled, star-studded sets this 50-plus-year-old festival had ever seen”.
The post David Grohl joins Paul McCartney and Bruce Springsteen at Glastonbury for first public show since Taylor Hawkins’ death appeared first on Guitar.com | All Things Guitar.