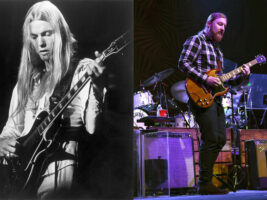 Derek Trucks recalls Gregg Allman’s funeral: “The way people came out to watch the car drive by – you see that for Muhammed Ali or presidents”

Blues rock guitarist Derek Trucks has recently spoken out over the loss of Gregg Allman of the Allman Brothers Band, who passed away in 2017 from cancer.

Derek Trucks – the nephew of Allman Brother’s founding drummer Butch Trucks – joined the group in 1999 after his success in The Derek Trucks band, forming part of their humongous line-up of guitarists that have come and gone through the years. These days he’s working on a new project, I Am Moon, for the Tedeschi Trucks Band, which he formed with his wife back in 2010.
In a recent interview on the Biscuits & Jam podcast, Trucks spoke on his new project, his summer tour and reflected on his past, including the passing of Gregg Allman: “I remember when we found out he’d passed away, we were starting our tour at Daily’s Place here in Jacksonville,” He recalled, “As we were pulling the bus into the parking lot I got a call from Bert Holman and the Allman Brothers manager and I knew immediately what it was, you could feel it coming.”
He continued, “I remember walking in and I was like, ‘I’m gonna need a few minutes’. I remember listening to Ain’t Wastin’ Time No More cause [his] vocal track is just incredible… he was somethin’ man, he was really something.”
Further into the chat, Trucks spoke on the humbling turnout for Allman’s funeral, which included the likes of Cher and Jimmy Carter, and especially the multitudes of fans lining the streets: “There must have been 10, 15 thousand people – people with tents, music playing; it was a really incredible moment.” He added, “The way people came out to watch the car drive by – you see that for Muhammed Ali or presidents, you don’t see that for musicians a lot.”
To find out more on I Am Moon and get tickets for the Tedeschi Trucks Band’s upcoming tour, you can take a look at their website here.
The post Derek Trucks recalls Gregg Allman’s funeral: “The way people came out to watch the car drive by – you see that for Muhammed Ali or presidents” appeared first on Guitar.com | All Things Guitar.