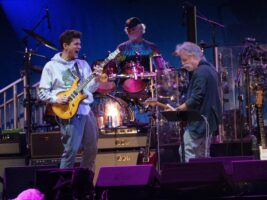 Dead & Company have announced their 2022 summer tour, which will start on 11 June at Dodgers Stadium in Los Angeles.

READ MORE: Dead & Company cancel appearance at Cancun’s Playing in the Sand due to COVID surge

The tour includes 20 dates, with stops in Boulder, Cincinnati, Chicago, Philadelphia and more, and will end with two nights at Citi Field in New York on 15 and 16 July.
General sale tickets will be available starting next Friday (8 April), while Ticketmaster Verified Fans will be able to register for presale right now, through the band’s website.
The full post below:

The band features four original members of the Grateful Dead, as well as guitarist John Mayer, bassist and vocalist Oteil Burbridge and keys player Jeff Chimenti.
This upcoming tour marks Dead & Company’s seventh tour since the band formed in 2015 with their most recent tour taking place only a few months ago in late 2021.
The tour announcement comes months after the jam band had to cancel their appearance at Playing in the Sand in Cancun, Mexico after surges in COVID cases across the country. The appearance was already set to go ahead without John Mayer after testing positive for COVID-19, and drummer Bill Kreutzmann who sat out of all the band’s January performances due to a heart condition.
In other Dead & Company related news, John Mayer announced last month that he was leaving Columbia Records after 21 years with the label.
In a post to Instagram, he wrote:
“After 21 years, eight studio albums, and some wonderful personal and creative relationships, I have decided not to renew my recording agreement with Columbia Records.
“Hard as it is to say goodbye, I’m excited to pursue new avenues of making music, both of my own and with other artists.”
The post Dead & Company announce summer 2022 tour appeared first on Guitar.com | All Things Guitar.