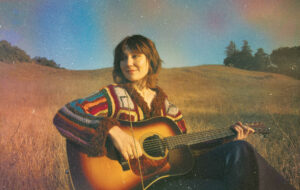 “I’ve never paid attention to my right-hand technique”: Molly Tuttle on her arresting playstyle, returning to her bluegrass roots, and her new live band

Molly Tuttle is one of the most exciting acoustic guitarists and songwriters to hit the scene in recent years. With a new album and band that signals a return to her bluegrass roots, she’s only set to get bigger.

READ MORE: Scott Metzger on honing his craft as a sideman and his new LP, Too Close To Reason

We chat to Tuttle on the phone from a coffee shop in Boulder, Colorado, to discuss guitars, G tuning and Golden Highway.
You’ve been touring through some beautiful landscapes and have endured some truly extreme temperature changes.
“That’s right! We were in Cancún last weekend with Dave Matthews, then we made our way to Steamboat, Colorado, and played outdoors at a ski resort. My suitcase was full of shorts, T-shirts and bikinis – and my giant, hot-pink snowsuit that I had specially made. It was the weirdest packing I’ve ever done for a tour!”

Your new album Crooked Tree marks your return to bluegrass following covers album But I’d Rather Be With You.
“This record came about last year when I started writing bluegrass songs. I’ve always wanted to make a real bluegrass record but, at the same time, I love exploring other genres. I got the chance to do that in 2020 on my covers record, where I explored a bunch of styles of music. After that I found comfort in going back to the first musical memories I had, of listening to bluegrass as a kid. I realised that was the direction I wanted to go in.”
“It was kind of fun to contact all my bluegrass heroes and make this recording. I
called up a bunch of artists that I’ve been listening to since I was a kid, like Jerry Douglas, Dan Tyminski, Old Crow Medicine Show, Gillian Welch – people I have admired my whole life. We went into the studio and made this record that I am really proud of.”

What’s next for you?
I am really enjoying this time with my live band Golden Highway, which was put together after recording. I’ve been friends with everyone in the band for so long and it’s a nice feeling to look around on stage and feel proud to be making music with such great players. I can’t wait to make a record with this new band.
Crooked Tree is out now on Nonesuch Records.
The post “I’ve never paid attention to my right-hand technique”: Molly Tuttle on her arresting playstyle, returning to her bluegrass roots, and her new live band appeared first on Guitar.com | All Things Guitar.