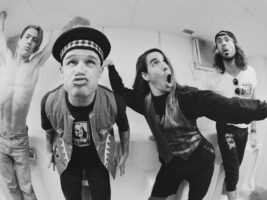 “So he walked away”: Anthony Kiedis opens up on John Frusciante’s frequent departures from RHCP

Red Hot Chilli Peppers frontman Anthony Kiedis has opened up about the band’s on-and-off-again relationship with guitarist John Frusciante, who recently rejoined the band for the third time.

READ MORE: Anthony Kiedis opens up on his struggle to complete the upcoming Chili Peppers Album

Speaking to Apple Music’s Zane Lowe, Kiedis spoke openly about Frusciante’s first departure in 1992, describing himself and the guitarist as “quite foolish at the time”. He explained, “I wanted things the way I wanted it and he wanted it the way he wanted it.
“And he may have been more evolved in some ways and less in others, but he disappeared and somehow we did survive and had this very interesting era with Dave Navarro and John went down as far as he could. And then, just the whisper of a ghost saying, ‘Hey, I’m not gone yet,’ Or like, okay, ‘Let’s do this.’”
Frusciante returned in 1999, leading to the band’s release of the era-defining Californication album. The band would go on to release two additional highly successful albums with Frusciante, By The Way and Stadium Arcadium, before the guitarist left the band again in 2009.
Kiedis says that the fame that came with their massive success and the touring led to Frusciante’s second departure. “He did make a holistic decision. He’s like, ‘It’s not for me. It’s too much. Too much attention, too much travel, too much chaos, too much… all of it.’ And so he walked away.”
Kiedis makes it clear to Lowe that he respects the guitarist’s decision to leave the band for the sake of his own wellbeing. “I think he needed a solid 12 years of processing all of that, which he was kind of willing to do slowly,” Kiedis explains. “Like, ‘Who are these people? What do they mean to me? What have we done together? What life do I want to live?’ Super smart.”
Frusciante returned to Red Hot Chilli Peppers in 2019. Frusciante first joined the band in 1988 as an 18-year old, replacing guitarist Hill Slovak, who had died due to a heroin overdose earlier that year. He had been a fan of the band at the time, and idolised Slovak.
The Chilli Peppers’ 12th studio album, Unlimited Love, is out April 1 on all major streaming platforms.
The post “So he walked away”: Anthony Kiedis opens up on John Frusciante’s frequent departures from RHCP appeared first on Guitar.com | All Things Guitar.