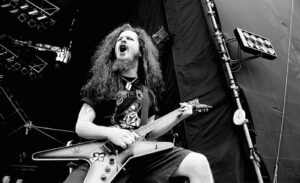 The estate of Dimebag Darrell has announced the termination of the late Pantera guitarist’s posthumous endorsement deal with Dean Guitars, and has also filed a lawsuit against Dean’s parent company, Armadillo Enterprises, for allegedly breaching the terms of their contract. The suit also accuses the company of filing “unauthorised and fraudulent trademark registrations” pertaining to the Razorback and Stealth body shapes.

In a statement posted on Dimebag Darrell’s (real name Darrell Lance Abbott) website, the guitarist’s partner, Rita Haney, announced the end of the Dime estate’s relationship with Dean.
“After much consideration, it is with great sadness that I announce the longstanding relationship between Dimebag and Dean Guitars is over,” she wrote. “Unfortunately, we were forced to file a lawsuit against Dean Guitars… It was necessary for us to end Dime’s endorsement of Dean Guitars to continue to honour and celebrate his legacy the way he deserves, and in the way he had laid it out.”
The statement also attached the copy of a complaint and demand for a jury trial, which was filed in the US District Court, Middle District of Florida, Tampa Division. The suit lays out a series of grievances that date back to when Abbott signed his original endorsement deal with Dean back in November 2004.
Dean posthumously launched a range of Dimebag signature models, including the Razorback and Stealth, in the wake of his death. (Image: Jeff Kravitz/Getty)
Abbott was tragically murdered just weeks later on 8 December 2004, but Dean continued to produce Dimebag guitars posthumously, releasing a series of models based on the Razorback and Stealth body shapes, as well as Dean’s existing ML design.
The suit claims that the Dimebag guitars doubled Dean’s sales inside two years, but that the company had neglected to make payments for various contract stipulations in the years since, and had attempted to “water down Abbott’s endorsement” when the contract was renegotiated while the estate was under the supervision of his older brother and Pantera/Damageplan bandmate, Vinnie Paul, who himself died in 2018.
The suit also claims that Dean had filed, with co-defendant Concordia Investment Partners, for numerous “unauthorised and fraudulent” trademarks for the Razorback and Stealth body shapes and names, despite the original agreement allegedly stipulating that all designs and trademarks would remain the sole property of Dimebag and only giving Dean permission to continue using the body shapes after the agreement had ended.
The Razorback body shape trademark that Armadillo is alleged to have filed without permission. (Image: USPTO)
The suit also alleges that when Haney became the steward of Abbott’s estate in 2020, she found it “incredibly difficult” to work with Dean CEO Evan Rubinson, and found him to be “incredibly disrespectful and often times belligerent to the legacy of Abbott”.
In the statement, Haney claims that, “I made several attempts to amicably settle our dispute… However, it became clear that Dimebag’s relationship with Dean Guitars had come to an end when the new CEO… told me that Dime has been dead for 16 years, and they could not make the money they once did (so basically he’s used up???) and then continued on to tell me that we should go somewhere else… well, we will!”
The suit requests a jury trial and a “full and complete accounting” of the agreement dating back to 2004 in order to determine what damages and other money is potentially owed.
Dean, for its part, has responded to Haney’s statement and filing by releasing a statement of its own from the company’s CEO & President, Evan Rubinson.
“We have always treated Dime and his brother Vinnie with the utmost respect and loyalty,” Rubinson’s statement reads. “We have enjoyed a long-standing, 17-year relationship with Dime and Vinnie, and continue that relationship with Vinnie’s estate on the ddrum [the drum manufacturer also owned by Armadillo Enderprises] side. We are shocked and saddened to see the actions that Ms Haney has taken after both the Abbott brothers have tragically passed away, and we wish her the best in her future endeavours.
“However, it is unfortunate that Ms Haney has allowed her unrealistic demands and accusations to dictate the future of the Dimebag Darrell legacy in the absence of Dime’s immediate family. Dean Guitars is proud to have played a role in ensuring Dime’s legacy not only survived, but thrived over the past 17 years.
Dimebag was previously a Washburn endorsee, switching to Dean just weeks before his murder in 2004. (Image: Annamaria DiSanto/Getty)
“We have stood by the estate through good and bad. Ms Haney’s claims – across the board – are baseless, without any merit, and not grounded in reality. We will allow the full truth to come out as the legal process takes its course.”
Dean Guitars is currently also the defendant in a high-profile lawsuit with Gibson Guitars, which accused Armadillo Enterprise of trademark infringement and trademark counterfeiting pertaining to the Flying V, Explorer and ES body shapes.
Dean vigorously defended itself in response to Gibson’s suit, which was filed in June 2019, calling the accusations “entirely baseless” vowing to challenge the suit and see to get the courts to cancel Gibson’s trademarks. “We respect and value the intellectual property rights of others. But… some things are just too common and basic for one company to claim as their own property,” said Rubinson at the time. That case is ongoing.
While it may be some time before Dean and the Dimebag estate have their day in court, one thing seems certain – the days of Dean making Dimebag guitars are over, but in her statement, Haney sounded a positive note about the future of Dimebag instruments.
“Moving forward, our goal will be to ensure the rightful and respectful celebration of Dime’s legacy and the indelible mark he and his music made on the world,” she wrote. “We want to capture the ‘spirit of the deal’ that was discarded by Dean Guitars, like it should have always been done. In this spirit, we hope to soon have more positive news to share with you regarding the future of ‘Dime Guitars’.”
Read the full statement and lawsuit on dimebagdarrel.com
The post Dean Guitars sued by Dimebag Darrell’s estate over body shape trademarks and breach of contract appeared first on Guitar.com | All Things Guitar.