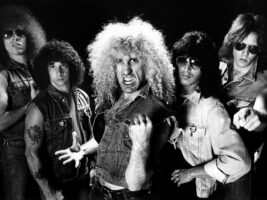 Dee Snider says “watered-down,” “corporate” and “predictable” hair metal “had it coming” when it was toppled by grunge

Reflecting back on Nirvana’s seminal LP Nevermind and how it changed the face of rock, Twisted Sister frontman Dee snider has said that hair metal’s demise was inevitable, given the state of the genre in the early 90s.

The release of Nevermind is viewed as a turning point for rock. With a speed never before seen in the music industry, it led the charge for grunge to almost completely strip the charts of any trace of hair metal for the rest of the early 1990s.
A decade earlier, Twisted Sister were part of the first wave of hair metal that would become inescapable in the rock mainstream: Poison, Mötley Crüe, Warrant, Ratt, Great White, WASP, and countless others dominated MTV and the radio airwaves. However, upon Nevermind’s release in 1991, Snider had left Twisted Sister almost four years prior, the band dissolving shortly afterwards in January of 1988.
Reflecting back on Nevermind upon its 30th anniversary for Consequence, Snider claimed hair metal “had it coming.” “It had gotten so watered-down and so corporate and so predictable,” he said. “Bands were being assembled for their look.”
He opined that: “Whitesnake – the band in the video for Still Of The Night was physically assembled for being pretty.”
In addition to the overt focus on image, Snider recalled how hair metal’s music tended towards, unfortunately for everyone, acoustic-guitar-laden ballads. “All of a sudden, it’s unplugged, and we’re not even electric anymore,” he said. “We’re singing folk songs. Well, now you deserve to be knocked off your pedestal.”
Snider remembers looking fondly upon grunge at the time. In the early 1990s, he was a radio host on a program called Metal Nation, and as he recalled: “When that Nirvana album arrived, and Soundgarden, and the first Pearl Jam album, Alice in Chains – I thought, ‘This is awesome. This is heavy!’”
He added, “And suddenly [grunge] became [this thing that] was killing other bands. But I thought it was great when it first came out.”
The post Dee Snider says “watered-down,” “corporate” and “predictable” hair metal “had it coming” when it was toppled by grunge appeared first on Guitar.com | All Things Guitar.