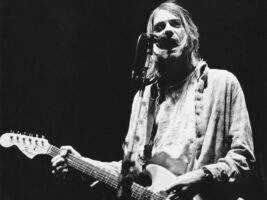 Tomorrow (24 September) marks 30 years since the release of Nirvana’s groundbreaking album Nevermind. In celebration of the anniversary, the album is set to receive an expansive multi-format special edition re-release, beginning on 12 November.

READ MORE: Dave Grohl recalls Nirvana’s ambitions with Nevermind: “Hopefully we’ll achieve the success of Sonic Youth and get our own apartment!”

Across the releases, spanning huge Super Deluxe records to standard digital, LP and CD re-releases, there are 94 audio and video tracks collected. 70 of these have never been released, until now.
All formats of the anniversary edition feature audio that has been remastered from the original half-inch analogue master tapes into high-resolution 192kHz 24-bit digital audio.
The previously-unreleased recordings include four live shows from the Nevermind tour: Live in Amsterdam, Netherlands (recorded and filmed on 25 November 25, 1991), Live in Del Mar, California (recorded on 28 December), Live in Melbourne, Australia for triple j (recorded 1 February 1, 1992) and Live in Tokyo, Japan (recorded on 19 February 1992).
Alongside releases on streaming platforms, the Super Deluxe Edition can be preordered as a 5CD + BluRay set (£116.99) or as an 8LP Vinyl Box Set (£189.99). The standard 30th Anniversary Edition can be preordered as a 2CD album (£10.99), or as a Gatefold Vinyl LP (£33.99), which comes with a bonus seven-inch record.
See the full 94-song-strong tracklist and preorder or pre-save the sets here.
The post Nevermind’s massive 30th Anniversary Edition comes with 70 previously unheard tracks appeared first on Guitar.com | All Things Guitar.