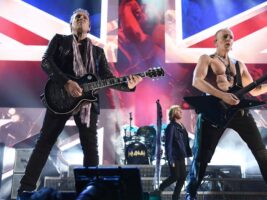 Def Leppard singer Joe Elliot hints the band could collaborate with Ghost: “We’re not scared of collaborating with anybody”

Def Leppard singer Joe Elliot has said that a Def Leppard-Ghost collaboration could be possible, following Ghost leader Tobias Forge revealing that he tried to emulate the British band’s songwriting on Impera.

“I saw that he’d said he thought we were great,” Elliot told Metal Hammer when asked about Forge’s comments. “He talked about he was inspired by the way we constructed songs – he’s not just wearing the T-shirt. It’s proper.”
Elliot said that while Ghost had not yet contacted Def Leppard about a collaboration at this point in time, he’s certainly open to it.
“We’ve got Alison Krauss on our new album, we did stuff with Taylor Swift 10 years ago. We’re not scared of collaborating with anybody,” he said.
He also mentioned that Ghost’s Impera had been on his “go-to” list in recent weeks, noting that he could feel the similarities to Def Leppard “in the attitude” if not musically. “Back in the ‘80s, when Hysteria came out, everybody heard it and went, ‘Fuck, we’ve got to make an album that sounds like Def Leppard,’” Elliott continued.
“They’d mix their albums to try and copy it, but nobody admitted it. I like the fact that he actually admits to liking us. He’s not worried about losing cred with his fans by namechecking Def Leppard.”
Forge had told Metal Hammer earlier this month that Def Leppard had influenced his songwriting for Impera, saying, “I thought I would see if I could do it a little more like Def Leppard did it. Every song starts with one thing, and then there’s a verse, then there’s a pre-chorus that feels like a chorus, and then there’s another pre-chorus and another thing and finally, after like five different sections, comes the chorus, in a completely different key.”
He also praised the legendary act, adding, “It’s such a riot! Every song! Even Pour Some Sugar on Me is quite intelligently written. I’m not saying that as a surprise – I think they were great.”
The post Def Leppard singer Joe Elliot hints the band could collaborate with Ghost: “We’re not scared of collaborating with anybody” appeared first on Guitar.com | All Things Guitar.