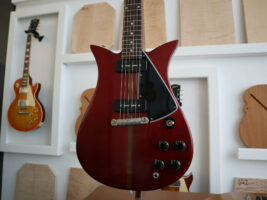 The story behind the Gibson Theodore

Imagine finding a painting in your attic signed by Picasso, or clearing out the garage only to find a chair design by Charles and Ray Eames nestled behind the lawn mower and the rake… imagine how that must feel?

READ MORE: “I convince myself that if I play drunk, I’ll be more confident on stage”: Guitar Nerds’ Joe Branton on why playing your own songs doesn’t make you a bad person

It’s perhaps a stretch to say that this is what happened when Gibson head of product development Mat Koehler was rifling through some old filing cabinets that had made the trip from Gibson’s original Kalamazoo headquarters down to their current home in Nashville some three decades previously, but not by much.
As Kohler was rifling through the stacks of unordered and unsorted papers, he picked up a binder and a sketch dropped out. Upon closer examination, Koehler couldn’t quite believe what he’d stumbled across – a detailed sketch for a never before seen electric guitar design, dated 18 March 1959, and signed by Gibson head honcho Ted McCarty.
Image: Michael Watts
Theo-cracy
Now, if you’re a guitar player, you’ve probably heard the name Ted McCarty over the years – his tenure as president of Gibson between 1950 and 1966 is regarded as the company’s first golden era, and many of McCarty’s innovations provided the backbone of that. For instance? Well how does the Tune-O-Matic bridge and the humbucking pickup strike you for starters?
And that’s before we even get into the iconic guitars he designed, including the ES-335, Flying V, Explorer, SG and Firebird. As Gibson UK’s Lee Bartram tells us, “Ted McCarty is one of the most influential people in history, in terms of guitar design.”
McCarty’s eye for a body shape is such that even his guitars that were widely considered to be duds when they were launched, such as the Flying V, Explorer and Firebird, have since been shown to be ahead of their time, and have attained iconic status years or even decades after they were originally discontinued.
Image: Michael Watts
All of which brings us back to that drawing tumbling out of a binder at Gibson HQ. Now, it can’t be easy for a heritage company founded in the 1800s to release a new product with a radical new design. This is particularly true of guitar brands which have struggled in the past to reconcile the combined weights of tradition and expectation with the pressure to innovate and evolve.
In the case of Gibson those opposing forces must be particularly keenly felt – yet with the company now under leadership intent on celebrating its boundary-breaking history it seems to have found a happy balance. And what better way to show both sides of Gibson’s bold and confident new era than to create a brand new guitar that not only provides a direct link back to the company’s most cherished and respected era, but also offers a fascinating glimpse into an alternate reality. Enter, the Theodore.
Image: Michael Watts
Super Ted
Named in tribute to its creator, the Theodore is Gibson Custom’s attempt to meticulously bring to life the guitar McCarty sketched out one day and for whatever reason, filed away for 65 years. It helps that, while not a full technical blueprint, the original drawing contains useful information including the scale length, rim depth, suggested body and fingerboard material, even the radius of the body’s rounded edges and the glossiness of the finish are stipulated.
The Theodore represents a significant departure from traditional Gibson electric guitar-making techniques, both then and now, and had Gibson simply released this guitar without context, fans would have wondered what on earth they were thinking – but the remarkable thing is that this radical left-turn originated directly from the same source as so many timeless 50s Gibson classics.
Image: Michael Watts
The Theodore is a dual-P90 equipped double-cut guitar which sports twin horns exactly where an SG doesn’t. This gives the guitar a silhouette not unlike “tulip” models by brands such as Teisco and Rickenbacker – which it predates.
Some artistic license has necessarily been taken by Gibson in order to make the guitar a workable instrument, most notably the re-positioned selector switch which now nestles exactly where you’d expect to see it on a Gibson guitar rather than on the lower horn.
Image: Michael Watts
What might come as a surprise on a Gibson design from 1957 is the ‘hockey stick’ headstock now synonymous with the Explorer model, which came along in 1958. This means that not only was the Theodore the first Gibson design to use this now-iconic headstock (that we know of so far!), but it also means that when the original Explorer prototype’s split-V headstock was discarded, McCarty must have borrowed the hockey stick from this earlier design, and the rest is history.
In the years since, the Explorer’s adoption by metal bands (not to mention Kramer borrowing it for its shred machines in the 80s) has given the hockey stick headstock strong associations with heavy music, but it’s fascinating to imagine an alternative history where the Theodore or another Gibson guitar sported this peghead instead – how might we associate it differently today?
Image: Michael Watts
Another shock to the system is that rather than mahogany, the original McCarty sketch stipulates alder as the wood of choice for this guitar. That’s a very Fender-y choice, but even Leo and his crew had only been using the wood for a few months when the McCarty sketch was created, showing that McCarty was at the cutting edge of guitar trends across the industry. In addition there is a walnut centre stripe which, although visible on the original drawing, was not specified as being of a particular wood.

We visited Gibson Brands HQ in London to learn more from Head of Marketing Lee Bartram and get some hands-on experience with this new design. We plugged the Theodore straight into a Marshall amp – a traditionally epic pairing for a soapbar Gibson, and had a very nice time indeed. You can watch the results in the video above.
The Theodore is limited to just 318 instruments worldwide, but this might not be the final treasure that escapes from Gibson’s Archive – rumours abound that the Theodore is just the first of a new series of never-before-seen instruments rescued from the cutting room floor over Gibson’s long and illustrious history. We can’t wait to see what comes next.
For more features, click here.
The post The story behind the Gibson Theodore appeared first on Guitar.com | All Things Guitar.