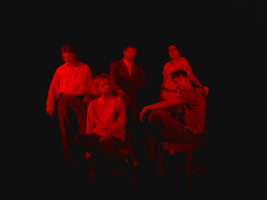 Fontaines D.C. – Skinty Fia review: a band brimming with ideas and a boundless horizon before them

If Fontaines D.C. viewed 2020’s exceptional Grammy-nominated second album A Hero’s Death as a creative left turn after the raw power of their debut, Dogrel, its success appears to have strengthened their desire for exploration. Skinty Fia, their third album in four years, is a richly varied work of art that reveals its depths gradually, from a band unwilling to commit to a single sonic path.

READ MORE: “We were approaching the guitar as if it were a synth”: Fontaines DC on changing things up for new album Skinty Fia

While A Hero’s Death was written on the road by an exhausted Dublin fivesome in the midst of a dizzying ascent, Skinty Fia often draws its inspiration from looking back at Ireland from the outside, the band members now in diaspora.
With producer Dan Carey booked again, the prevailing atmosphere is moody and introspective. Like A Hero’s Death, which commenced with the defiant I Don’t Belong, Skinty Fia opens with brooding intensity on In ár gCroíthe go deo (in our hearts forever).
Inspired by the family of an Irish-born woman who fought a three-year legal battle with the Church Of England for her right to have the titular phrase inscribed on her gravestone in Irish Gaelic, it bristles with indignant fury over six simmering minutes. A jabbing single-note bassline and ghostly choral harmonies establish a foreboding mood and the tension is ratcheted higher in increments, around the chilling mantra “gone is the day, gone is the night, gone is the day”.

During the Skinty Fia sessions, the band had been listening to Primal Scream’s 2000 album XTRMNTR, as well as plentiful 90s American alt-rock, and vintage Mustang aficionado Carlos O’Connell wrote Big Shot inspired by Nirvana’s Live At Reading album.
The song voices his discomfort at being in the spotlight, a familiar topic from A Hero’s Death. Against a gloomy backdrop, O’Connell and Conor Curley’s serrated surfy riffs wind around lines that hint at dislocation, such as “Found the moon too small, and home is a pin, rusting through a map”.
Conflicted thoughts of home endure on How Cold Love Is, too, written by vocalist Grian Chatten after a trip back to Dublin. It settles into the same sort of captivating dirge, around a chorus-heavy two-chord pattern, the fatalistic imagery suggesting an interest in addiction.
Skinty Fia’s cover
The storm clouds look like taking up residence as six snare hits and a grungey bass groove introduce first single Jackie Down The Line. Yet it’s Fontaines D.C. at their infectious best, and by far the most immediate moment on Skinty Fia, lit up by O’Connell and Curley’s Marr-esque jangle.
Thematically, it’s positively caliginous, though, probing the depths of an abusive relationship. Chatten, playing the nefarious main character, warns ominously “Don’t think we’d rhyme, I will wear you down in time, I will hurt you, I’ll desert you”.
One of the central musical themes of A Hero’s Death was what Curley called “lower-register, single-note cowboy-style playing”, often from his delectable 1966 Fender Coronado. It’s present again on Skinty Fia, slicing through the grey on Bloomsday, named after Ireland’s James Joyce day. The scabrous sound mingles with a heavenly slide guitar riff as Chatten laments lost youth while beholding drunken tourists blighting a Dublin where “there’s always fucking rain and it’s always dark”.
Image: Filmawi
There’s something of The Stone Roses about Roman Holiday, Chatten’s vocal softer and more airy than usual. Splashy snares and atmospheric lead-guitar sparks fire off around another two-chord structure, before making way for a coruscant 12-string in the mid-section.
Overflowing with ideas in the wake of their second album, Fontaines D.C. reportedly considered making Skinty Fia a double LP, incorporating a set of more sparse traditional Irish songs. The heart-tearing The Couple Across The Way sounds like a remnant from that exercise, with Chatten accompanied only by an accordion as he spins the tale of a world-weary elderly couple watching two love-struck youngsters moving into the house on the other side of their street.
Elsewhere, the dubby drive of the title track comes from a wholly different place. It was inspired by murky 90s electro as O’Connell kicked around a Death In Vegas tune, abetted by drummer Tom Coll’s breakbeat explorations. It’s an inspired departure, topped off by enthralling dark observations from Chatten (“I let her prise apart my ribcage, like a crackhead at the blinds”).

Skinty Fia’s closing pair span nearly 11 minutes, mapping out both the distance this band have travelled since Dogrel and the diverse musical ambitions they harbour.
An echoey shoegaze atmosphere pervades, first on the devotional I Love You, with the deathly declaration that “If I must have a future, I want it with you”. Arpeggios twinkle above the vocal before the build begins at two minutes, menacing guitars baring their teeth in the periphery, the kick drum insistent and Chatten repeatedly chanting “the bastard walks by”.
The closing Nabokov, written by Curley, becomes a heavenly storm, almost post-rock guitars swirling around the pained admission that “You sold me on living, living is nothing, but you’re so good looking, I bled myself dry”.
When we caught up with Fontaines D.C. two years ago, Conor Curley spoke of his desire to make a third album representing a “romantic descent into madness”, a record that would be “maybe a little bit harder to digest”. His words were prophetic. Skinty Fia is a brilliantly absorbing work that poses as many questions as it provides answers over Fontaines D.C.’s direction of travel. They’re a creatively fearless band with boundless potential.
Fontaines D.C.’s Skinty Fia is out now.
The post Fontaines D.C. – Skinty Fia review: a band brimming with ideas and a boundless horizon before them appeared first on Guitar.com | All Things Guitar.