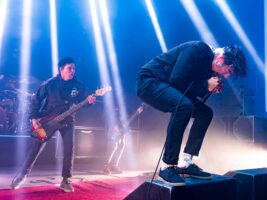 Deftones reveal they’re “chipping away on some new music”

Deftones has said that they are making their way through some new music, just months after former bassist Sergio Vega split from the band.

In an interview with Noise11.com, promoting the Californian frontman Chino Moreno’s other project, ††† (CROSSES), he spoke about their plans over the next few months, revealing that new Deftones music could be coming to our way.
“We’re just chipping away on some new music — those [other] guys are, at le ast, at the moment,” says Moreno. “We have some sporadic shows over the next couple of years, or a year or so, whatever. But for the most part, yeah, we’re just kind of winding down and taking some time off, for the most part.”
You can watch the full interview below:

The news comes months after new members officially joined the band. Earlier this year, Deftones recruited Fred Sablan to replace the bassist, Vega. In addition to this, they were also joined by a second guitarist, Lance Jackman.
If Sablan sounds like a familiar name, it’s because he is best known as the former bassist for Marilyn Manson, having toured with the controversial figure between 2010 and 2014. He has also played for Chelsea Wolfe, and Peter Hook and The Light.
In more Deftones news, the band, among others are currently teasing a band new nu-metal festival, launching in 2023. The festival, named Sick New World, will be hosted in the Las Vegas Festival Grounds, where the nostalgic pop-punk revival festival When We Were Young fest was also hosted.
There is limited information available about the festival, apart from the fact that it is unfortunately sold out, but it is set to take place 13 May 2023, and you can sign up for a waiting list for tickets at sicknewworldfest.com.
The post Deftones reveal they’re “chipping away on some new music” appeared first on Guitar.com | All Things Guitar.