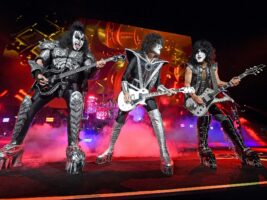 KISS frontman, Paul Stanley, says that Kiss will never be completely over, even after they complete their ‘End of the Road’ farewell tour.

In an interview with Ultimate Classic Rock, Stanley admits that the farewell tour, that is scheduled through July, is not the end for the legendary four piece, especially after bandmate Gene Simmons recently admitted that they plan to add another 100 cities to their expansive itinerary.
“We’re far from done. I’d like to say that this is the end of the road, but they keep paving more road,” says Stanley. “The only people that seems to bother are the people who hate us. Quite honestly, they’ve never mattered and they still don’t.
“The people who want to see us are thrilled. The people who wish we’d go away are going to have to wait. And in one form or another, we’re never gonna go.”
Earlier this year, Simmons has also told Youtuber Dean Delray that the glam rock band will “continue in other ways”.
“There could and should be a KISS show, kind of live on stage with effects and everything else, but also semi-autobiographical thing about four knuckleheads off the streets of New York that ends with the last third as a full-blown celebration of it… A full-on performance. Not with us. Although, not a problem stepping in every once in a while.”
While fans will be happy to hear that the band are adamant they will never leave the spotlight, Twisted Sister’s Dee Snider recently called out the band over their “fake farewell bullshit”, noting that it is “impossible to miss a band when they refuse to go away”.
The post KISS is “far from done”, says Paul Stanley appeared first on Guitar.com | All Things Guitar.