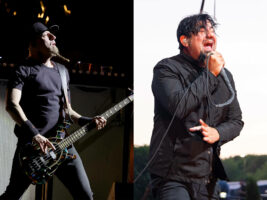 Deftones, System Of A Down and more tease 2023 nu-metal festival

Some of the biggest names in the nu-metal genre are teasing a brand new music festival, launching in 2023.

The festival, named Sick New World, will be hosted at the Las Vegas Festival Grounds in Spring next year – the same grounds where the recent nostalgic, pop punk When We Were Young fest was also hosted.
Prolific bands of the nu-metal scene have been sharing a teaser video to Instagram, including System Of A Down, Korn, Deftones, Evanescence, Incubus and Chevelle. The official Instagram page for Sick New World is yet to share any posts, but there is a website up and running which allows eager fans to sign up for pre-sale tickets, expected to launch on Friday 11 November.

A post shared by System Of A Down (@systemofadown)

It also hosts the background to a poster branded with question marks, which looks set to be where the full roster of artists will be revealed.
Sick New World looks like another festival which aims to gather bands loved by Millennials and Gen Z once again. Following the success of When We Were Young, the emo festival has already launched its line up for next year.
The 2022 rendition of the event took place last month (October) and was headlined by My Chemical Romance and Paramore, both bands have made recent returns to making music and hitting the stage following a hiatus.
Younger generations are discovering and falling in love with the heavier sounds of nu-metal, even 21-year-old Willow, who exploded into the rock genre by collaborating with artist such as Avril Lavigne and Machine Gun Kelly, spoke to us at Guitar.com on her love of Deftones. She recently shredded the iconic riff to the band’s 1997 hit, My Own Summer (Shove It) at one of her October gigs.
Sick New World is set to take place 13 May 2023, sign up for pre sale tickets at sicknewworldfest.com.
The post Deftones, System Of A Down and more tease 2023 nu-metal festival appeared first on Guitar.com | All Things Guitar.