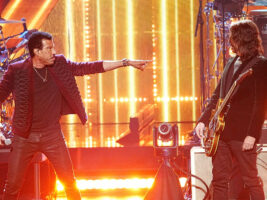 Lionel Richie and Dolly Parton rock out, and a Judas Priest reunion: highlights from the Rock Hall 2022 ceremony

The 2022 Rock & Roll Hall of Fame induction ceremony took place on Saturday in Los Angeles with several noteworthy moments on stage throughout the night.

The annual honours included legendary acts from those including Judas Priest, Dolly Parton, and Lionel Richie.
Here are some highlights from the night:
KK Downing rejoins Judas Priest on stage
The guitarist stepped on stage with his old band Judas Priest for the first time since Richie Faulkner replaced him in 2011.
The group performed three songs together along with another former member, drummer Les Binks. They played You’ve Got Another Thing Comin’, Breaking the Law, and Living After Midnight.
Dolly Parton debuts new music
The country legend introduced a new song from her upcoming Greatest Hits album along with Zac Brown on guitar and backing vocals.
Before starting, she coaxed: “How many of you rockers are gonna help me out?”
Later, she also performed her classic hit Jolene with Judas Priest frontman Rob Halford.
Lionel Richie rocks out with Dave Grohl
After Richie performed both Hello and All Night Long, Grohl, the Foo Fighters frontman, made a surprise appearance during Easy.
The pair joined forces for the song with Grohl on lead guitar, but it soon became a riff off once Richie held the mic to Grohl.
“We are celebrating one of the funniest jokes in my life,” said Richie, “because all of the songs I wrote and recorded, so many people told me, ‘These are the songs that will destroy your career.’”
It was also announced by John Sykes, chairman of the Rock & Roll Hall of Fame Foundation, that LA would be a regular host for the annual ceremony along with Cleveland and New York.

The post Lionel Richie and Dolly Parton rock out, and a Judas Priest reunion: highlights from the Rock Hall 2022 ceremony appeared first on Guitar.com | All Things Guitar.