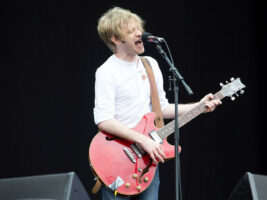 Greg Gilbert, frontman for UK indie rock band Delays, has died at the age of 44. Gilbert was diagnosed with bowel cancer in 2016.
Aaron Gilbert, Greg’s brother and bandmate, announced the news on Instagram, writing: “This afternoon at 2:22; we walked my brother back home to somewhere out there in the ether,” he wrote. “Greg died surrounded in the endless love that us and all of you have given him on this journey, and we will never be able to fully express how much it meant to him (and all of us) to have you by our side lifting us up like a winged army. ”
“Your messages, your encouragement and your compassion have been our oxygen for the last five years,” Aaron added. “He was my brother and my best friend, and we did everything together, and it was the greatest honour to be with him as he took one last gentle breath before leaving us. I could have sworn we were limitless… But now that ‘is’ has become ‘was’, I need to be mindful that there is still so much majesty out there in the universe, and so much to be thankful for despite the tidal wave of sadness washing over me right now.”
You can see his full tribute below.

The brothers formed the band in Southampton in the early 2000s, releasing their first album Seaside Glamour in 2004. They would go on to release four full-length albums, following their debut with You See Colours in 2005, Everything’s the Rush in 2008, and Star Tiger Star Ariel in 2010.
Greg Gilbert’s work with Delays slowed after his diagnosis of bowel cancer. He instead focused on sketching and poetry, his drawing eventually being shown at Southampton City Art Gallery, and his poetry being showcased by Carol Ann Duffy as part of her Laureate’s Choice series.
The post Delays frontman Greg Gilbert has died aged 44 appeared first on Guitar.com | All Things Guitar.