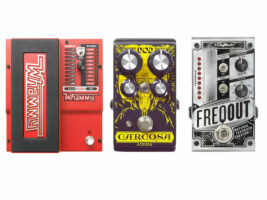 DigiTech and DOD appear to have been dropped by Harman

DigiTech and DOD appear to have been taken off Harman’s list of active brands, leading some to question if the popular effects marks have been discontinued or perhaps sold to another company.

READ MORE: SM Octave Fuzz review: Hendrix in a box and much more besides

The DigiTech website now lists each of its products, including those from DOD, as “currently not available”. Further, DigiTech appears to have been taken down from parent company Harman’s brand page.
Some users discussing the topic on The Gear Page reported being able to purchase pedals from the site since as late as 4 April. Many have speculated that the marks have been sold to a different company.
According to an archived version of the Harman website [via Wayback Machine], DOD products were still listed and purchasable back in February 2022.
Image: Wayback Machine
Ryan Bruce, host of the Riffs, Beards & Gear YouTube channel, discussed the brands’ disappearance from the Harman website in a video yesterday (12 April).

DigiTech’s offerings have spanned numerous stompboxes and multi-effects units, but the brand is perhaps best known for its pitch shifters, ranging from the Whammy and Drop to the Ricochet.
Many of DigiTech and DOD’s greatest innovations happened while product development was led by Tom Cram. These included such products as the Whammy 5, Ricochet, Mosfet Gunslinger, Rubberneck Analog Delay, iStomp, Boneshaker and Carcosa Fuzz.
In 2018, Cram and his team were laid off after it was decided that DigiTech and DOD would be integrated into the Samsung-owned Harman.
Cram, who now runs his own Spiral Electric FX, has shot down rumours of him rejoining DigiTech or DOD in a statement posted to his personal Facebook account:
“I’m getting a lot of DM’s with questions about DigiTech/DOD. I don’t know what is going on, I haven’t spoken to anyone at Samsung since 2018,” he said. “However, I will say to those predicting a good outcome, you need to push those rosy thoughts right out of your heads.”
Guitar.com has reached out to Harman for comment. Stay tuned for more on this story.
The post DigiTech and DOD appear to have been dropped by Harman appeared first on Guitar.com | All Things Guitar.