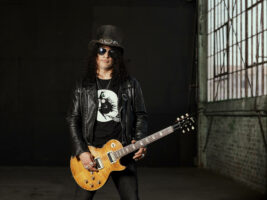 “The more brash and loose a band is on record, the more I’m into it” Slash on Myles Kennedy and the Conspirators, recording live, and his legacy

Not that rock stars tend to exist within the confines of the traditional working week but you might say that Slash seems surprisingly chipper for first thing on a Monday morning. He has good reason to. His band, Slash featuring Myles Kennedy and the Conspirators, has just released its first studio album in four years: 4. It’s his fourth with this outfit and fifth solo outing overall, and he reckons this one might be the best yet.

Thanks to covid-19, 4 spent almost a year on the shelf. Now, with the band well into a US tour – their first live engagements in nearly three years – it’s finally been let off the leash, and is evidence of a band in rude health.
The album was recorded live at the historic RCA Studio A in Nashville, Tennessee, with Dave Cobb at the helm. Dave Cobb the country music producer extraordinaire but also Dave Cobb the man perhaps best known for his Grammy-nominated work with Californian modern-day rock powerhouse Rival Sons. As with Sons, Cobb has captured Slash and co at their most feral. The results are damn impressive.

Rather than a man of flesh and bone, these days ‘Slash’ evokes a larger-than-life, almost mythological guitar god, identified by top hat, dusty aviators, gleaming Gibson guitar and jet-black mass of frizzy hair, such is Saul Hudson’s inimitable sense of image. His legacy is long assured. But having worked with Myles Kennedy and the Conspirators for 12 years – longer than his first, planet-conquering stint with Guns N’ Roses and twice the length of Velvet Revolver’s lifespan – what is his legacy?
Speaking from Los Angeles on Valentine’s Day, we chat to Slash about 4, Myles Kennedy, Gibson Records and GNR. “You’re my first Valentine’s call!”, he laughs. For that, Mr Hudson, we can only apologise…

It’s been widely reported that a new Guns album is in the works. Is it about building on the band’s legacy?
I really don’t have forethought with these things. I just do them! I always find that the best-laid plans don’t pan out the way you imagine them. With Guns, you just do it and see what happens.
Slash featuring Myles Kennedy and The Conspirators’ 4 is out now on Gibson Records.
The post “The more brash and loose a band is on record, the more I’m into it” Slash on Myles Kennedy and the Conspirators, recording live, and his legacy appeared first on Guitar.com | All Things Guitar.