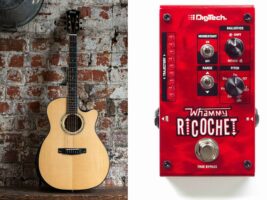 DigiTech appears to have been acquired by Cort

It appears that DigiTech (and possibly DOD) have found a new owner in Cort (Cortek), the South Korean manufacturer of electric and acoustic guitars, basses and ukuleles. The purported acquisition follows news from earlier this year that Harman dropped DigiTech from its list of brands.

READ MORE: DigiTech and DOD appear to have been dropped by Harman

The privacy policy section of the DigiTech website now describes the brand as a “division of Cortek Corporation” while also listing its address as the Cortek headquarters in the Gangseo district of Seoul, South Korea.
Image: DigiTech
At press time, no announcement – from either DigiTech nor Cortek – has been made about the supposed acquisition. However, that hasn’t stopped guitarists online from sharing their thoughts on the matter; most seem to be in favour of the alleged acquisition.
“Cort likely wouldn’t buy the brand unless they intended to do something with it,” wrote one user of The Gear Page. “I imagine we will see continued production of steady selling classics but also a good possibility of some new product development.”
“Only thing I’m worried about is that Cort only bought the name and none of the designs,” opined a user of the SevenString forum. “Worst case scenario is we just get a bunch of generic pedals under the Digitech brand if this is legit.”
Another said: “It might be a long shot but if they could somehow get some of the old R&D guys back, that would be pretty amazing.”
Many of DigiTech and DOD’s greatest innovations – from the Whammy 5 and Ricochet to the Rubberneck Analog Delay and Carcosa Fuzz – happened while Tom Cram led product development.
Cram, who now is working full-time with Spiral Electric FX, took to Facebook to state that he wasn’t and hasn’t been in the loop with DigiTech’s latest developments.
“I’m getting a lot of DM’s with questions about DigiTech/DOD. I don’t know what is going on, I haven’t spoken to anyone at Samsung since 2018,” he said. “However, I will say to those predicting a good outcome, you need to push those rosy thoughts right out of your heads.”
The post DigiTech appears to have been acquired by Cort appeared first on Guitar.com | All Things Guitar.