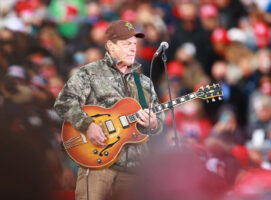 Ted Nugent claims COVID-19 will be soon regarded as “the biggest scam known to man”… as well as much, much more.

Never one to shy away from controversy, infamously-outspoken rocker Ted Nugent has once again made his views on the COVID-19 pandemic clear, this time insisting that the event will be considered “the biggest scam known to man”  despite his battle with the virus last year.

READ MORE: Gene Simmons Insists That All Other Artists Would “Pass Out Within A Half-Hour” Of Performing In His Costume

The 73-year-old, openly conservative musician recently took part in a new interview with American Songwriter, an discussion in which he explained why he had become such a lightning rod for controversy in recent years.
Alongside his pro-gun attitudes, thoughts on those battling with drug addiction, generalisations about people based on their religion and his conspiratorial views on modern-day US politics, Nugent also doubled down on his belief that the pandemic will soon be considered “the biggest scam known to man”. He claimed this despite the fact that COVID-19 has come to dominate life over the past two years, and claimed the lives of over six million people.
“It’s all so simple, it’s stupid,” he states. “Courtney Love is a drug-abusing liar; guns and the Second Amendment are perfect; drugs are for weak losers; politics are supposed to be driven purely by the US Constitution; gay people are just people; the very concept of animal rights is a dirty scam; too many Islamists are murderous, homophobic devils; COVID-19 will go down in history as the biggest scam known to man…”
Nugent’s seemingly random slight against Courtney Love is likely in reference to a claim she made to radio host Howard Stern back in 2004. Love stated that she performed oral sex on Nugent when just 12 – an age she later corrected to 14. Nugent has denied any allegations of sexual abuse against minors, however, the claim – among others – has followed him around since, hence his mention of Love when discussing his nature as a controversial figure.
His stance on the pandemic, somewhat paradoxically, comes following his own battle with COVID-19 last year, an event where, despite earlier insisting that the virus was “not a real pandemic”, the musician confessed that he had “never been so scared” in his life.
“It was really scary. I didn’t think I was gonna make it. I literally couldn’t function for about 20 hours” He admitted. “[It] was like nothing I have ever experienced. I mean, from the tip of my toes to the top of my hair, I literally was dizzy and weak and struggled to get up to go to the bathroom. And I would lay in the bathtub a couple of times a day with the water as hot as I could take it just to divert.”
Image: Gary Miller/Getty
Yet, regardless of his struggle to overcome the illness, the pro-gun activist still remains openly opposed to the vaccine, taking to Off The Record to discuss his views last autumn.
“It’s not a vaccine. It’s an experimental shot. Now the FDA was forced to authorize it recently, but they were jabbing people with an experimental shot” he told Off The Record. “Most of America doesn’t believe it’s a vaccine. The only ones that are taking it are either gullible or being forced because they’re gonna lose their job, lose their life and lose their livelihood.”
He later concluded the interview by ‘speaking’ directly to the audience members who had gotten the jab. Here, Nugent proceeded to baa like a sheep, stating: “I speak their language. I will speak to them thusly. They understand that.”
This stance comes as somewhat little of a surprise, as the guitarist has previously inferred that the virus was a scam, made by the “leftists” to remove America’s 45th president, Donald Trump from office. Moreover, Nugent has also repeated unproven conspiracy theories that claim the media inflated the official death count from COVID, in order to make it seem more severe.
Find the full interview with Ted Nugent at American Songwriter.
The post Ted Nugent claims COVID-19 will be soon regarded as “the biggest scam known to man”… as well as much, much more. appeared first on Guitar.com | All Things Guitar.