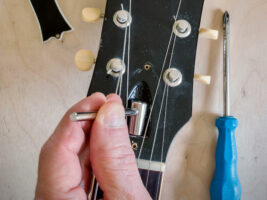 DIY Workshop: How to adjust your guitar’s truss rod

Adjusting the truss rod is fundamental to any guitar maintenance routine but it’s widely believed to be dangerous, and even that necks can be ruined in the process. You needn’t be afraid of this humble device – but first, some background.

READ MORE: DIY Workshop: How to convert your Stratocaster into a baritone guitar