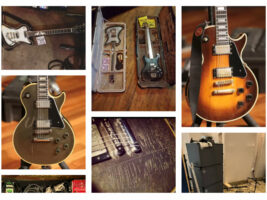 Thieves have allegedly made off with a massive amount of musical equipment after breaking into a truck used to transport Russian Circles’ gear.
The American post-rock band announced the unfortunate news on their website yesterday (17 October), stating that their U-Haul was broken into while they were parked at a Holiday Inn in California.
“On the night / early morning of Oct 17th Russian Circles U-Haul truck was broken into and robbed at a Holiday Inn parking lot in Chowchilla, CA which is between Fresno and Modesto,” the band wrote. “Please be on the lookout and help us spread the word.”
The band have urged parties who have information about the stolen gear to reach out to them at russiancircles@sargenthouse.com.
The full list of equipment stolen from the group is staggering, spanning guitars, amplifiers, pedals and cabinets, as well as an entire suite of microphones and drums.
The stolen instruments include a pair of Gibson Les Paul Customs, an Electrical Guitar Company Series 2 bass, a custom First Act baritone guitar, Quilter Overdrive 202 amps and cabinets from Darkglass, Emperor and Peavey.
See the full list of gear here.
At press time, Russian Circles have not yet made an announcement as to whether the stolen equipment will put a halt on their show with System Of A Down at the Oakland Arena later today (18 October).
The post Russian Circles report that thieves have stolen their guitars, amps and touring equipment appeared first on Guitar.com | All Things Guitar.