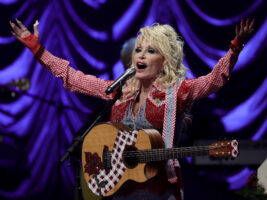 Dolly Parton to re-record Stairway to Heaven for her rock album: “I’m going to redo that really on the money”

Country icon Dolly Parton has revealed her plans to re-record Stairway to Heaven for her upcoming rock album, in a style that’s supposedly “more true” to the Led Zeppelin original.

Earlier this year, Parton announced that she will be making a rock album after news came that she was nominated for induction into the 2022 Rock And Roll Hall Of Fame.
Speaking in a new Pollstar interview, the musician shared that the rock album in question is indeed in the works and that it will — once again — feature the Led Zeppelin classic she’d covered in her 2002 bluegrass album Halos & Horns.
Though this time, she intends to do it in a style that’s “more true to the regular record.”
“I’m going to redo that really on the money,” Parton said. “I did it kind of bluegrass-style when I did it; but when I do the rock album, I’m going to actually re-record it – and do it more true to the regular record. I’m trying to see if Robert Plant might sing on it.”
“Maybe Jimmy Page might do the pick-up part on it. I’m looking forward to dragging in some of the great classic people, girls and boys, to sing on some of the songs. I’m not far enough along to discuss who and what, but I am going to do an album.”

Elsewhere in the interview, Parton also noted several other artists she would like to work with on the record, including Ed Sheeran, Miley Cyrus, Heart, and country star Chris Stapleton: “There’s a couple people that I love, and I’m going to be asking them maybe to sing with me on my rock album,” she said.
“Chris Stapleton is one of my favourite people ever. I have always wanted to do something with him. Even though he’s not considered rock ‘n’ roll, he’s kind of like me, he’s accepted all the way around. I’m thinking that certainly out of the country field, when I do my rock album, I’m going to maybe ask him.”
The post Dolly Parton to re-record Stairway to Heaven for her rock album: “I’m going to redo that really on the money” appeared first on Guitar.com | All Things Guitar.