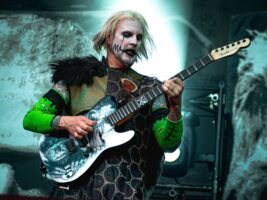 READ MORE: Peter Frampton’s next record will be entirely self-written: “I’m going where no Frampton has gone before”

The news comes just after Mötley Crüe co-founder and lead guitarist Mick Mars — who has been with the band since 1981 — announced his retirement from touring due to his ongoing struggles with Ankylosing Spondylitis, a form of inflammatory arthritis.
A statement from the glam-metal outfit reads, “While change is never easy, we accept Mick’s decision to retire from the band due to the challenges with his health. We have watched Mick manage his Ankylosing Spondylitis for decades and he has always managed it with utmost courage and grace.”
“To say ‘enough is enough’ is the ultimate act of courage. Mick’s sound helped define Mötley Crüe from the minute he plugged in his guitar at our very first rehearsal together. The rest, as they say, is history. We’ll continue to honor his musical legacy.”
The band also assured fans that they “will carry out Mick’s wish and continue to tour the world as planned in 2023.”
“No doubt will it take an absolutely outstanding musician to fill Mick’s shoes so we are grateful that our good friend, John 5, has agreed to come on board and join us moving forward. We’ll see all of you Crüeheads out on the road!”

The upcoming tour is far from John 5’s first rodeo with members of the Crüe. The guitarist has been credited on three original songs on 2019’s The Dirt Soundtrack. He is also a member of heavy metal supergroup L.A. Rats., alongside Rob Zombie, Tommy Clufetos, and Mötley Crüe bassist Nikki Sixx.
Speaking about his friendship with Sixx in an interview with 102.9 The Hog, John 5 said, “Me and Nikki are like two 15-year-olds who are just on the phone twenty thousand times a day and we hang out all the time. We’ll go to the mall and we’ll go ride bikes and we’ll do ridiculous stuff like that. And so, of course, we like to play music together.”
The post John 5 confirmed as Mötley Crüe’s touring guitarist appeared first on Guitar.com | All Things Guitar.