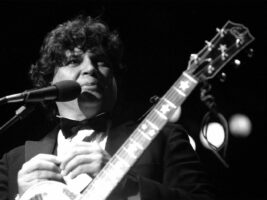 Don Everly, the last surviving half of the pioneering rock ’n’ roll duo The Everly Brothers, has died at the age of 84.
The musician passed away at his home in Nashville, Tennessee yesterday (22 August) from an undisclosed cause. His family issued a statement to the Los Angeles Times: “Don lived by what he felt in his heart. Don expressed his appreciation for the ability to live his dreams … with his soulmate and wife, Adela, and sharing the music that made him an Everly Brother.”
Don and Phil Everly’s signature close harmony vocals made a lasting impression on many top acts of the 1960s, including The Beatles, The Beach Boys and Bee Gees. They were among the first artists inaugurated into the Rock & Roll Hall of Fame in 1986, alongside Elvis Presley, Chuck Berry, Little Richard, Buddy Holly and Jerry Lee Lewis.
Before Don and his younger brother Phil made their mark as The Everly Brothers, they performed with their parents, Ike and Margaret, as The Everly Family.
In 1956, the brothers began penning and recording their own tunes. Chet Atkins, who was a family friend, introduced them to the music publishing company Acuff-Rose, which in turn brought them over to Cadence Records, where they recorded their first million-seller hit Bye Bye Love in 1957.
The Everly Brothers released 21 studio albums across their career and garnered eleven No. 1 singles. In 1973, the pair broke up in the middle of a show at Knott’s Berry Farm and would not reunite musically for over a decade.
They eventually returned to perform at London’s Royal Albert Hall in 1983 and released four more studio albums. Phil Everly died of pulmonary disease in 2014 at the age of 74.
Tributes to Don Everly from the music world have poured in online. See a selection below:

I am so sad to hear about the loss of Don Everly. Both Phil and Don created songs and harmonies that changed music forever. You will be together again now. RIP Don and Phil
— Peter Frampton (@peterframpton) August 22, 2021

Very sad day. Both of the Everlys were part of my musical life growing up. We were inspired by their wonderful records and their singing and their voices. Wake Up Little Suzie was my favorite as a kid. #DonEverlyRIP #doneverly https://t.co/a4hH0i2vaf
— Dave Davies (@davedavieskinks) August 22, 2021

I’m sad to hear about Don Everly passing. The Everly Brothers were a big influence on us and we learned a lot from their beautiful harmonies. Love & mercy to Don’s family. pic.twitter.com/khH6kfaPmP
— Brian Wilson (@BrianWilsonLive) August 22, 2021

We have now lost Don Everly. Touring with Phillip and Donald was literally thrilling. To have the privilege of singing with their breathtaking iconic voices was one of the great gifts of my career. Godspeed, Donald. I love you. pic.twitter.com/Vr8c9ikWAY
— Nancy Sinatra (@NancySinatra) August 22, 2021

Don Everly of the Everly Brothers passed away today at age 84.
The Everly Brothers’ magical and haunting harmonies influenced countless musicians including Simon & Garfunkel, The Beach Boys, and The Beatles.
His voice was described as “the most beautiful sound you’ll ever hear” pic.twitter.com/5maQIJilkX
— The Beatles (@BeatlesEarth) August 22, 2021

Don Everly of the Everly Brothers has died.
All The Saints Rejoice in Heaven When a Fallen Angel Flys.
This world loves you Don. Thank You for the Music.#DonEverly #EverlyBrothers pic.twitter.com/Mt3XZubfqP
— Roy Orbison Jr (@Royorbisonjr) August 22, 2021

R.I.P. Don Of ‘The Everly Brothers’ who along with his brother Phil, wrote some of the most memorable & classic songs of all time… Thank You for the Music https://t.co/KOEU3Jxb7i pic.twitter.com/FKvceRdiAL
— Julian Lennon (@JulianLennon) August 22, 2021

The post Don Everly of pioneering rock ’n’ roll duo The Everly Brothers has died at 84 appeared first on Guitar.com | All Things Guitar.