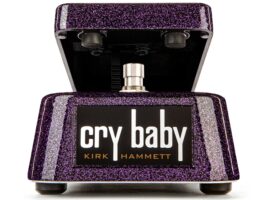 The signature pedal, which is based on the Metallica lead guitarist’s own Cry Baby Rack Wah setting, dons a special edition purple sparkle finish to match his recognisable Ouija guitar.
Photo: Jim Dunlop
The pedal recreates the sound that he used to “fire up the licks that revolutionized metal solos”. It also features an even response with an arresting midrange wail and a thick top end, which gives the player the ability to play fast melodic runs over “hard-charging riffage”.
Speaking about the pedal, the guitarist says, “I always feel a great energy when I play my purple sparkle Ouija guitar. I thought it would make a killer, sonically spiritual connection to have a pedal with that same outwards vibe.”
This announcement is the newest edition to the lineup of special edition Dunlop Cry Baby Wah pedals. The “Custom Badass” pedal released at the beginning of 2021 features a kick switch on the pedal’s side, allowing for easy changing between the two Wah voices. In addition to this, the Tom Morello Cry Baby Wah was released the year prior and bears quotes selected by Morello himself.
In more Kirk Hammett news, the Metallica guitarists has recently spoken out about going solo, with the release of his brand new EP, Portals.
In a recent interview with Rolling Stone, Hammett reflects on the reception of the new solo project, and how he was “shocked” that he received all of the bands blessings before embarking on it. The guitarist says, “It was amazing because our band has not had a lot of great progress with band members going solo, as everyone knows. But all that went down almost 20 years ago, and we’re such different people now. We’re all just older, wiser, and more mature.”
You can find out more about the Hammett signature Wah Pedal through JimDunlop.com
The post Dunlop announces special Kirk Hammett edition of Cry Baby Wah appeared first on Guitar.com | All Things Guitar.