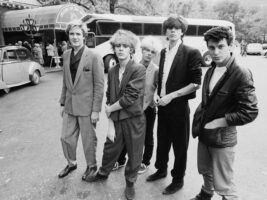 Duran Duran bassist John Taylor has addressed the decision to induct the band into the Rock And Roll Hall Of Fame, stating that categorising their music as such is a “joke”. In addition, he discussed how the members are determined to prevent becoming a mere nostalgia act, insisting that they convey “something more than that”.

READ MORE: Who is The Rock And Roll Hall Of Fame actually for?

Speaking with Spin during a recent interview, the Duran Duran bassist John Taylor has addressed the decision to induct the band into the Rock Hall, stating that he believes it is a stretch to regard them as within rock ‘n’ roll.
Experiencing their heyday throughout the 1980s, the electronic-dominated pop-rock style of Duran Duran saw the band become one of the most influential and successful artists of the decade. However, whilst tracks such as Girls on Film and Rio became indisputable hits for the band, the question of the band’s genre was never quite as solidified, with the recent choice to induct the members into the Rock And Roll Hall Of Fame dividing fans.
Speaking out on the decision, John Taylor spoke on behalf of the band, stating:
“I know [Rock And Roll Hall of Fame Foundation President and CEO] Joel Peresman; […] And I know that for them, they’re constantly trying to peel people’s minds back, to see it as more than just that.” He continues, “It’s such a joke that Duran Duran are in anything with ‘rock and roll’ over the top of it. Almost everything [in that era was something] you could call it rock ‘n’ roll, because it was free-standing, swing oriented.”
The bassist elaborates, simply laughing off the comments that throw the band’s genre into question:
“Electronics started coming in [to our sound and…] then that’s where people went, ‘That’s not rock ‘n’roll.’ And for the first few years, that seemed important.” Taylor continues, “[Eventually] I was like, ‘Fine, fine. We’re not rock and roll. Who cares?’ And now, well, now [we’re] going into the Rock and Roll Hall of Fame. [Laughs.]”
Elsewhere in the interview, Taylor discusses how he and the other members are instead more concerned with preventing becoming a 1980s cliché. Explaining how the band want to avoid becoming a nostalgia circuit, the musician states: “we’re quite lucky because we’ve got a body of songs. […] Knowing that you’ve always got these cornerstone songs that you can rely on, I think those songs actually give us the liberty to break away.”
When questioned about what fans should expect from a Duran Duran show, the bassist confirms that audiences should expect a heavy dose of new material.
“I think there is nostalgia there, but for Duran fans, there’s something more than that. And [our audience] knows that Duran Duran aren’t just going to play a greatest hits set. There’s going to be something new in there, some new exploration.”
Duran Duran are set to be inducted into the Rock and Roll Hall of Fame later this year. Other inductees for 2022 include Pat Benatar, The Eurythmics and Dolly Parton.
The full interview with John Taylor can be found on Spin.
The post Duran Duran bassist John Taylor calls their Rock Hall induction a “joke” appeared first on Guitar.com | All Things Guitar.