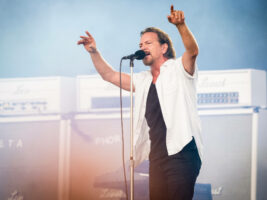 In a statement posted on their social media today ahead of the now-cancelled performance, Pearl Jam apologised to fans for the cancellation, writing, “To all those who were anticipating a great Pearl Jam show tonight in Vienna, we were too,” explaining that “heat, dust, and smoke” from forest fires at the band’s last outdoor show in Paris left frontman Eddie Vedder’s throat too damaged to perform.
The statement continues, “[Vedder] has seen doctors and had treatment but as of yet, his vocal cords have not recovered. This is brutal news and horrible timing…for everyone involved. Those who work so hard to put on the shows as well as those who give their precious time and energies to attend. As a band, we are deeply sorry and have tried to find options to still play. And Ed wants to play. There’s just no throat available at this time… So very, very deeply sorry.”

(1/3) To all those who were anticipating a great Pearl Jam show tonight in Vienna, we were too. However, due to the extreme circumstances at the last outdoor site outside of Paris (heat, dust, and smoke from the fires) our singer Ed Vedder’s throat was left damaged. pic.twitter.com/Aa3LWclluB
— Pearl Jam (@PearlJam) July 20, 2022

Reuters has reported that Britain recently recorded its highest-ever temperature of 40 degrees Celsius as part of the ongoing heatwave in Europe. Firefighters were also recently called in to southwestern France to battle huge forest wildfires, with Robert Stefanski, chief of Applied Climate Services at the World Meteorological Organization, telling the outlet that “In the future these kind of heat waves are going to be normal and we will see even stronger extremes.”
Pearl Jam were also forced to cancel the remaining shows on their North American tour after a second member of the band tested positive for Covid-19 back in May. Drummer Matt Cameron was diagnosed with Covid-19, forcing the band to enlist stand-in drummers  — including Pearl Jam’s original drummer Dave Krusen as well as audience members — just a week before being forced to cancel the shows when bassist Jeff Ament was also diagnosed with the virus.
Guitarist Stone Gossard has hinted that the band are working on a new album, which will be produced by Andrew Watt, who took home Producer Of The Year at the 2021 Grammy Awards. “We’ve recorded some songs. We’re on our way. We’re making music,” the guitarist said.
Pearl Jam’s last record came in the form of their album Gigaton back in 2020.
The post Dust and smoke from European wildfires leaves Eddie Vedder with throat damage, Pearl Jam concert in Vienna cancelled appeared first on Guitar.com | All Things Guitar.