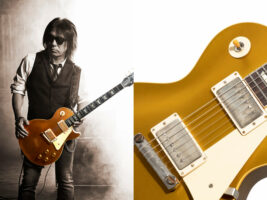 Gibson Custom Shop has announced a new Tak Matsumoto 1955 Les Paul Goldtop electric guitar that will be exclusively available in Japan and Asia.

The 1955 Les Paul Goldtop is modelled after the B’z guitarist’s own, and features a lightweight one-piece mahogany body with a two-piece plain maple top. Electronics-wise, the Goldtop will include a set of Burstbucker Pro Alnico 5 pickups that have been hand-wired with vintage taper CTS potentiometers and Grey Tiger capacitors.
The guitar’s finish and hardware has been custom-aged to match Matsumoto’s Goldtop, and will come with a brown/pink reissue 5-latch hardshell case and certificate of authenticity. The guitar is only available in gold finish.
Gibson has yet to disclose the guitar’s price and availability in the Asia region.

Matsumoto, a Grammy award-winning guitarist, composer, and record producer, is perhaps best known as one-half of Japanese rock veterans B’z, who are set to celebrate the 35th anniversary of their debut next year. He has also released 16 solo studio albums, with his most recent release coming in the form of the 2020 album Bluesman. His Grammy award win in 2011 also conferred him the distinction of being first Japanese person to win an award in the pop music category.
In other Gibson news, Gibson Brands Brand President Cesar Gueikian recently made headlines when he possibly revealed a line of artificially-aged acoustic guitars in the works. Gueikian appeared to show off two aged Gibson acoustic guitar models resembling a relic’d Hummingbird and J-45 respectively, though no further information about these acoustics has been made available at the time of publication.
Gibson recently launched several limited-edition acoustic guitars in collaboration with The Everly Brothers and Cat Stevens. The Everly Brothers SJ-200 and Cat Stevens J-180 Collector’s Edition acoustic guitars were both limited to 50 units available worldwide, and were tailored according to the artists’ signature acoustic guitars of the same make.
More information at Gibson Japan’s website here.
The post Gibson announces Japan and Asia exclusive Custom Shop Tak Matsumoto Signature 1955 Les Paul Goldtop appeared first on Guitar.com | All Things Guitar.