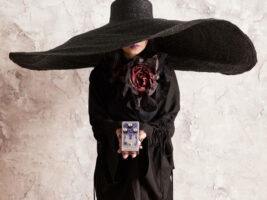 EarthQuaker Devices has teamed up with Boris to launch the Hizumitas Fuzz Sustainar.

The Hizumitas is based on Boris guitarist Wata’s main fuzz pedal: a vintage Elk Sustainar (yes, spelt with an “a”), a rare Japanese variant of the Triangle Big Muff Pi. The Hizumitas, therefore, has all of the thick, saturated fuzz character you can expect from a Big Muff-style pedal, however with notably more midrange than some variants.
EarthQuaker Devices explained how, when developing the pedal, component drift meant that: “The only way we were going to truly capture the magic was to get our hands on her original pedal. Wata was kind enough to send her beloved pedal halfway across the world so we could see what made it tick.
“Right away, we realised it had something special that none of the others had – heavy saturation with a gritty edge and a massive bottom while still maintaining a clear and dynamic tone with enough mids and top end to cut through the sludge”
The pedal’s controls are faithful to the original’s, with just volume, sustain and tone to adjust output level, gain, and EQ character respectively. EarthQuaker says that the tone control is unusual for a Big Muff-style pedal: it’s effectively active, with bass frequencies being boosted in lower tone settings and treble frequencies being boosted at higher settings.
The volume control gives you unity gain at around 20-30 per cent of its operation. That means the rest of the control is dedicated to a huge volume boost – enough to blast your preamp section into all-encompassing distortion, if you so wish.
To launch the pedal, Boris have also recorded a new track with the pedal, Reincarnation Rose, presented in an amazingly stylish video. Check it out below.

The Hizumitas Fuzz Sustainer lists for $149. There’s also a limited-edition, Reverb-exclusive black colourway that comes with a vinyl of the Reincarnation Rose EP. This EP is exclusive to this pedal bundle, which lists for $169 in total. Check the limited edition out over at Reverb, and the standard pedal out over at earthquakerdevices.com.
The post Earthquaker Devices and Boris launch the Hizumitas Fuzz Sustainar appeared first on Guitar.com | All Things Guitar.