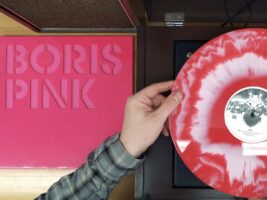 EarthQuaker Devices has teased an imminent collaboration with Japanese noise-rock-metal-doom-drone legends Boris in a headbang-heavy video.

Any details of what the collaboration is are scant, all we know so far is that the EQD team really loves Boris.
The video features the needle being dropped on the track The Woman On The Screen, from the Boris album Pink. The EarthQuaker office then spends the next 57 seconds headbanging to the riff, which, if you’ve heard it, is impossible not to do.

It won’t be the first time the pedal brand has teamed up with a noise-adjacent, doom-adjacent, hard-to-classify band. In 2019 they teamed up with the band Sunn O))) to release the Life Pedal, an octave fuzz, distortion and boost pedal inspired by the tones from their records Life Metal and Pyroclasts. Fittingly Boris and Sunn O))) have also collaborated, most notably on the record Altar.
Stay tuned to Guitar.com for more information on the collaboration as we have it.
The post EarthQuaker Devices teases collaboration with Boris appeared first on Guitar.com | All Things Guitar.