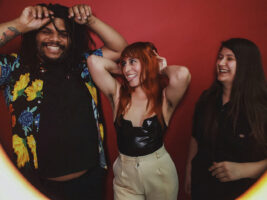 Punk band Mannequin Pussy have set up a fundraiser to help recoup losses after their tour van and trailer were stolen while in Akron, Ohio, on the final leg of their tour with Angel Du$t and Pinkshift.

READ MORE: “People are dying. People are losing their jobs. It was scary to be creative”: Mannequin Pussy on overcoming despair on new EP, Perfect

The band posted a photo of the van and U-Haul trailer that were stolen, alongside a list of all of the stolen gear. See both below. You can get in touch with the band via their Twitter if any of the gear is identified.

Photo of our van/trailer that was stolen last night in Akron. List of gear to come. pic.twitter.com/fOZJNjO8xH
— missy (@mannequinpussy) October 23, 2021

Full list of stolen gear. Thank you to everyone who has reached out – especially those in Akron. pic.twitter.com/BawR6cBmzz
— missy (@mannequinpussy) October 23, 2021

The group has also established a GoFundMe following the theft, writing on the fundraiser’s page: “This has been a huge loss for all of us, both financially and emotionally. Between the stolen gear, lost merch sales, new merch printing, new van rentals, and more, we’re estimating at least a $50,000 loss.
“Luckily we have insurance for the gear and the van, but that will only cover some of the gear and there are still more costs coming as we try to catch up from this. As the goal is only an estimation, if we meet or exceed our actual needs with funds to spare, they will be donated to an organisation of our choosing. Also please remember that the government will tax us on all the money raised through this GoFundMe!
“Any donations to help us out are so greatly appreciated. We also put up new items for preorder in our webstore if you’d like to help out that way instead.”
The band set a goal of $30,000 on the fundraiser when it was launched yesterday, and have currently surpassed that by almost $8,000. You can still donate at the page here.
Mannequin Pussy’s latest release was their Perfect EP, which arrived in spring of this year. Frontwoman Missy Dabice told us of the cathartic process of recording it following pandemic restrictions: “It was really fun to dust that off, play fast, and loud, and scream again. What’s the thing that you can’t do? I’m definitely not screaming… I’m definitely not playing guitar really loud. I have neighbours.
“I can’t play with the people I love because we can’t even see each other. It makes sense to me that those were the first things that came out. Looking back on it, besides the time I took acid last year and floated in a lake by myself, I felt the happiest in the studio, just creating again and getting to be with the people who inspire me.”
The post Mannequin Pussy set up a fundraiser after the theft of their tour van appeared first on Guitar.com | All Things Guitar.