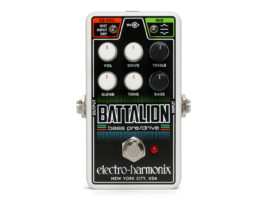 Alongside the release of the Sovtek Deluxe Big Muff Pi, Electro-Harmonix has announced two other dirt boxes: the Flatiron Fuzz and the Nano Battalion. The former takes after the iconic RAT2 pedal while the latter is a bass preamp/OD with a few tricks up its sleeve.
Flatiron Fuzz
The Flatiron Fuzz is EHX’s take on the iconic RAT2 distortion pedal. It’s a pedalboard-friendly op-amp powered fuzz/distortion unit that boasts vintage appointments, including a late-70s style drive circuit and symmetrical hard clipping.
In terms of sound, the Flatiron shines in both low- and high-gain settings. The former dials in mild distortion, while the latter delivers thick, saturated drive tones.
Control-wise, the pedal retains a simple three-knob layout comprising “Volume”, “Drive” and “Filter” controls. The latter functions as a low-pass filter that can be configured for a specific cut-off frequency. This allows you to dial in the desired amount of high end.
Retails for $72.70.
Nano Battalion

The Nano Battalion is an analogue bass preamp/OD pedal. Designed with the popular MOSFET drive circuit, this compact unit can serve up a wide range of grinding bass tones.
A standout feature of the Nano Battalion is the inclusion of a three-band EQ with three EQ positions for added customisability. The EQ controls are as follows:
“Treble”
Boosts or cuts above 1kH

The three-way “EQ Position” switch, however, allows you to dictate where the EQ is applied:
“Distortion” mode:
Places EQ after the distorted signal
Shapes distortion tone while preserving clean sound

Apart from the above, the pedal also features “Volume”, “Drive”, “Blend” and “Tone” controls.
Check it out in action here: