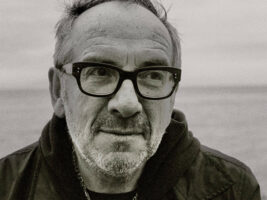 Elvis Costello And The Imposters have announced a 2022 UK tour, in support of their new record The Boy Named If.

The new album is set to arrive on 14 January 2022 via EMI. The tour will begin on 5 June next year at the Brighton Dome, and conclude at London’s Hammersmith Apollo on 23 June.
The Imposters are Steve Nieve on keyboards, Pete Thomas on drums and Davey Faragher on bass and backing vocals. Talong with Charlie Sexton for an extensive UK run of dates.
Costello said of the album’s concept upon its announcement: “The full title of this record is The Boy Named If (And Other Children’s Stories). ‘If’ is a nickname for your imaginary friend; your secret self, the one who knows everything you deny, the one you blame for the shattered crockery and the hearts you break, even your own. You can hear more about this ‘Boy’ in a song of the same name.”
Tickets will be available on Friday 10 December at 10 AM over at Costello’s website.
The full list of dates is below
June 2022
5 – Brighton Dome
7 – Glasgow Royal Concert Hall
8 – Newcastle O2 City Hall
10 – Liverpool Philharmonic
11 – Manchester Opera House
13 – Birmingham Symphony Hall
14 – Leicester De Montfort Hall
16 – Oxford New Theatre
17 – Bath The Forum
19 – Portsmouth Guildhall
20 – Swansea Arena
22 – Ipswich Regent Theatre
23 – London Eventim Apollo
The post Elvis Costello And The Imposters announce UK tour appeared first on Guitar.com | All Things Guitar.