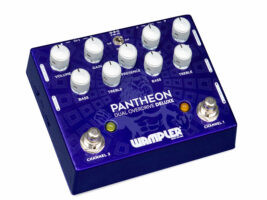 Wampler has released its own take on the dual-Blues Breaker-style format, made popular by the Analog Man King Of Tone.

The pedal is an expanded version of Wampler’s Pantheon, a Blues Breaker-style overdrive. The Pantheon deluxe offers two independent Pantheon circuits, each with slightly different voicings. Channel One is voiced closer to an original Blues Breaker, while Channel Two has a more modern character, being voiced after the original Pantheon.
The two channels each have their own inputs and outputs, meaning that you can run pedals in between the two drives, or use each on one side of a stereo signal chain. However, if you just use the main inputs and outputs, the two sides run in series. The order of the pedals can also be switched. For even more switching flexibility, there’s MIDI in and out to control the relay-based bypass.
On the side of the unit are four slide switches to adjust each channel’s overall voicing and gain level. Each channel also has controls for volume, gain, treble and bass, with the baxandall-style bass control which cuts or boosts the low-end either side of noon. There’s a global presence control, which can adjust the top-end to suit your amplifier best.
The Pantheon Deluxe Dual Overdrive lists for $269.97. Find out more at wamplerpedals.com.
The post Wampler releases its own take on the double Blues Breaker: the Pantheon Deluxe Dual Overdrive appeared first on Guitar.com | All Things Guitar.