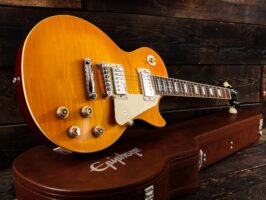 In recent years it’s become more common for big guitar brands to team up with select retailers to release exclusive limited edition instruments that offer configurations or colourways that you won’t find anywhere else. The latest chapter of this exciting new development in guitar culture is a team-up between Gibson’s affordable arm Epiphone, and UK retail giant Anderton’s on a new exclusive Les Paul.

Epiphone has enjoyed something of a renaissance in recent years, with an uptick in quality and perception of the brand going from strength to strength since its relaunch in 2020 – and it started at the top. Much has been said about the semantics of headstock design, admittedly most of it by us. A good headstock shape really counts, though, and we would be hard-pressed to find anyone who prefers the old Epiphone design to the sleek and elegant headstock that graces this instrument – in itself a return to a previous design.
You might remember the Epiphone 1959 Les Paul Standard from last year – a collaboration between Gibson Custom and Epiphone that blurred the lines between the brand’s budget and USA-made guitars in sumptuous fashion. Under the hood of this Anderton’s special you’ll find the same eye-popping ingredients – USA-made Burstbuckers, CTS pots, Mallory capacitors and 50s-correct wiring. Nice.

The big difference, of course, the outside – whereas the original ’59 Epi offered aged Dark or Cherry bursts, the aged Lemon Burst here completes the trifecta of classic Burst finishes. It’s a lovely job too – regarding the thinly applied finish up close, then check the pickguard and pickup surrounds, which are as close to the original lines as make no odds. It may be the power of suggestion but we could swear even the pickup casings have similar squared-off corners to those you’d find on a vintage instrument.
In use

In what might seem a cruel twist of irony, our instrument arrived on the very same day that this reviewer enjoyed several happy hours in the company of The Morgan Burst, an original 1959 example.
Plugging this beast into the same small British combo at full clip, we are presented with an exuberantly hooligan take on a bridge humbucker. While it inevitably lacks the finesse of the 50s instrument, it only costs approximately one 225th of the price… and quite frankly goes like stink.
The middle position works well for everything you’d want to achieve with a Les Paul, from stuttering Tom Morello-isms to that 1960s tone-off lead sound that really should be given a less problematic moniker than ‘woman tone’ in this day and age. The neck ’bucker on its own is beguiling, with a jazzy warmth that is at times more convincing than some 409-pickup-equipped instruments we’ve played bearing the Gibson name on the headstock.