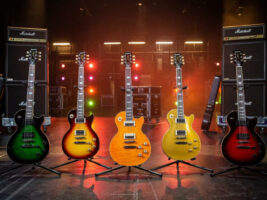 Following the introduction of Gibson’s Slash Collection at Winter NAMM 2020, Epiphone has announced the launch of its own Slash Collection, a range of acoustics and electrics designed in partnership with the Guns N’ Roses guitarist.

Notably for a set of signature models, the guitars will not be a limited-edition run, and instead join Epiphone’s standard production guitars.
The range is home to two variations on the Les Paul Standard. The Slash Victoria Les Paul Standard comes with a Goldtop finish, while the non-Victoria edition comes in either ​​Appetite Burst, November Burst, Anaconda Burst or Vermillion Burst. Each Slash Les Paul Standard is built with a mahogany body, a maple cap and a flame maple veneer. The neck is carved to a C-shape. Hardware and electronics include a two-piece Locktone Tune-O-Matic hardtail, a Graph Tech nut, CTS pots and two Custom Probucker humbuckers.
Take a look at some exclusive shots of these new guitars below.

The acoustic offering for the range is the Slash J-45, which comes in Vermillion Burst and November Burst. It’s made with solid mahogany back and sides and a solid Sitka spruce top, and has been fitted with Grover Rotomatic tuners and a Graph Tech TUSQ nut and saddle. Electronics come in the form of an LR Baggs VTC preamp and under-saddle pickup. Notably, the fretboard is radiused to 16 inches – much flatter than most vintage-style acoustic guitars.
Image: Epiphone
Signature features for every guitar include a “Skully” drawing on the back of each headstock, a signed truss rod cover and a custom hardcase.
Brand president Cesar Gueikian said of the launch: “Our new Epiphone Slash Collection brings our collaboration with Slash to the next level, expanding the offering of the iconic Slash models to Epiphone with an accessible price point. Slash was intimately involved in every aspect of the development of his new Epiphone Collection, and we are all excited to see his fans around the world rock out with them!”
Slash added: “I’m really proud to present this great lineup of excellent quality, signature Epiphone guitars. They sound & look fantastic. It’s all I could ask for.”
See him discuss the guitars in the introductory video below.